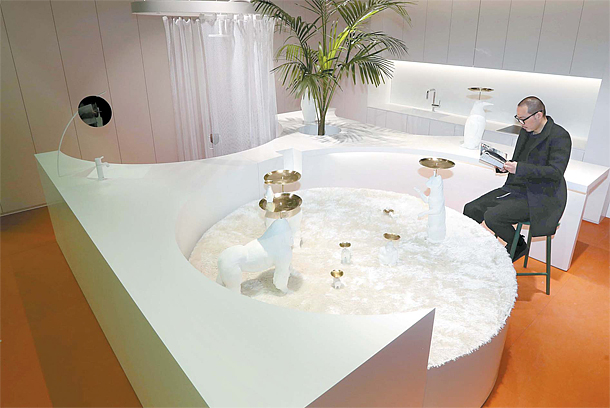 Small, quiet and lonely may be the first thoughts that people have when they think of living in a one-person home. However, the tide is changing as the home is becoming more than just a place to sleep.

Nowadays, three out of ten homes have one person living in them based on a report by Statistics Korea in 2016, making up 27.6 percent of all households in the country. Those with their own place have started to decorate their homes to express their personality and interests. They invest in furniture and make their homes a place where they can practice their hobbies or hold gatherings.

Hwang Da-na, a 36-year-old who decided to move out of her parents’ home has restructured her home. She moved her bed outside of the bedroom and into the living room so that she could sleep in the sunniest and most spacious room in the 56-square meter (603 square foot) apartment. In the smaller room, she placed a small dining table.

“I do like spending time in the sun, so why do I need to be in a room with less sunlight while I am home?” she said.

Her terrace, which is usually used as a multi-purpose storage room, now has a tea table and chairs. She said it is perfect when having a friend over to have a cup of tea or a glass of wine with background music on.

People like Hwang see their home a bit differently from what people living with other family members think of as home - a communal place for family or a means of financial gain, according to a survey conducted by Macromill Embrain. Those who live alone said home is a place for themselves when the company did a survey on the meaning of home and home interior in 2016.

It gets easier to decorate one’s home after people turn 40, as their income increases and their home tends to be as big as 128 square meters.

“The tendency to spend for themselves without thinking too much about what others think is now expressed in a place we call home,” said Lee Hyang-eun, professor of service design engineering at Sungshin Women’s University.

The growing interest in home interior design was seen at the Seoul Living Design Fair held at COEX in southern Seoul early this month. The theme of this year’s edition of the fair was “Play at Home.” The organizer said it wanted to show homes decorated under different themes, such as places for hobbies or as places for having people over.

“There are many lifestyle changes seen based on the emergence of more diverse forms of family, so it is now time to think about the roles that the home can play,” said the organizer. 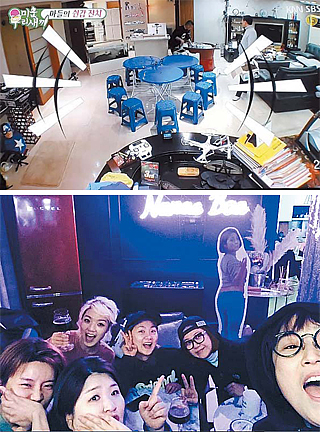 Celebrities also show how they decorate their homes through TV shows. Singer Kim Gun-mo had a birthday party at home, above, with an aquarium, and comedian Park Na-rae has decorated her space more like a nightclub to create a party vibe. [JOONGANG SUNDAY]

The idea was reflected in details at booths showing decorated rooms from by home decor designers and architects. Some showcased a single man’s home that suggested changing a living room into a tea room and lounge bar, and others show demolished walls between a kitchen, a dining space and a bathroom for those who don’t have children. These designers all try to break the prejudice of having a TV and sofa in the living room, a bed in a bedroom, and a dining table in a kitchen.

Wine columnist Kim Sang-mi has changed the largest room she has into a wine room in her home of 112-square meters. She has large and small wine cellars alongside up to 40 glasses and lots of books on wine. The large table in the middle of the room can sit up to 12.

“I need a space where preferably other food smells don’t interfere in order to focus on the wine,” said Kim. “This would be unthinkable if I lived with a family.”

The one-person home trend has made its way to TV shows that highlight the homes of celebrities and how they spend their time away from the attention of the public. Singer Kim Gun-mo showed off his living room where he had a birthday party alongside a large aquarium and tables for the event. Comedian Park Na-rae has shown a home decorated like a nightclub with lights and served a full-course meal and drinks.

Having a home not for just for oneself but a place of social gatherings is seen among others as well. Seong Han-ryeol, who used to live on the ground floor of a multi-household building, used the rooftop to hold parties.

There was nothing on the rooftop when he moved in, but he found a table for grilling meat at a flea market in his neighborhood and a sofa. He often called friends and invited them to bring their friends over, as long as they brought food. Seong liked the idea of strangers building relationships and tried to take photos and videos to remember the gatherings.

“I just thought that the abandoned rooftop could become a public space,” said Seong. “I one time had a movie night with neighbors after setting up a projector.”

Jo In-suk often finds her single-person home filled with a crowd. She got rid of a TV and sofa, and put a large table instead in the living room to use the space for a variety of purposes, including a reading club with friends or a place to have a beer. Her place has been used to throw a friends’ birthday party and even for her friends’ marriage proposal. She also plans to do a flea market on her lawn.

“Even if public transportation is not readily available, I purposefully looked for a house with a lawn,” Jo said. “I wanted to make the space as a social club of a kind.”

Why do people want to share their private space with others? An expert said it is part of human nature.

Kwak Geum-ju, a psychology professor at Seoul National University said that while people may choose to be single to enjoy freedom, they still want to maintain other personal relationships.

In fact a report on “Single-person Homes 2017” by KB Financial Group’s business research institute said that those who live alone answered that their freedom and enjoying hobbies on their own are the biggest benefits of living alone while they also said their biggest concern is psychological comfort, which can be easily affected by loneliness. Given this, inviting people to their homes is their attempt to have it all: Have a space all to themselves but open whenever they want so that they can avoid feeling lonely.

“Opening a house to others rather than meeting people in a public place means that you can build a friendly relationship in a shorter amount of time,” professor Kwak said. “Just like house parties are popular overseas, people’s homes can become a new spot for building a human network in Korea as well.”

These days, decorating one’s home is not just about making a place look nice by changing the wallpaper or tiles and it is more than just having a pretty place which you can show off on social media. The trend of inviting people into one’s home comes from the change of patterns in individual expenditure - spending not to own but to enjoy.

People now make more excuses to invite people over to their house, which is in stark contrast to the past when the only time one invited others to their home is when they moved into a new place. Now people gather because they have bought a new chair they have been eyeing, or they want to listen to a rare vinyl record.

“Single-person homes can be the most flexibly responsive to such trends,” said Ye Hee-young, an assistant manager of Design House. “Home is now looked at as a place for ‘well-staying.’”

Another factor that contributes to this new trend is that the period people stay in a single-person home is getting longer. BC Card Big Data Center did a mobile survey in 2016 which showed that 43.9 percent of those who answered had lived alone for over five years, and those who don’t plan to live with more people in the future was 23.9 percent.

“There are many who choose to stay single and stay away from any financial burden or stress that comes after getting married,” said the center.