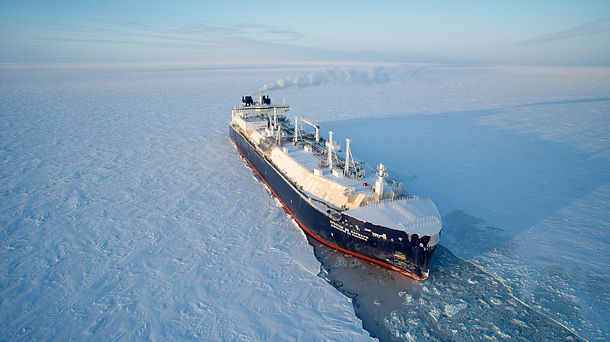 DSME’s Arc-7 ice-class LNG carrier sails through the Arctic Ocean en route during a test run before its delivery to Russian shipping company Sovcomflot. This is the first liquefied natural gas tanker with icebreaking capability. DSME is set to deliver 14 more vessels to the Russian shipper. [DSME]

Although on the verge of bankruptcy, Daewoo Shipbuilding & Marine Engineering demonstrated its competitiveness in the global shipbuilding industry by successfully delivering the world’s first icebreaking liquefied natural gas (LNG) tanker.

“DSME completed necessary inspections on the vessel, including icebreaking test, and delivered the ship to the owner,” the shipbuilder said in a press release on Tuesday.

The vessel, known as the Arc-7 ice-class LNG carrier, has the capacity to sail through ice water while hauling 173,600 cubic meters (227,060 cubic yards) of LNG, enough to power Korea for two straight days, according to the company.

The vessel left Okpo Shipyard in Geoje, South Gyeongsang, last November and has conducted a test sail in the Arctic Ocean for a month before being delivered to Russian maritime shipper Sovcomflot. The Russian shipper placed an order for 15 icebreaking LNG tankers in 2014 to be deployed for the Yamal LNG project, Russia’s second largest LNG plant, located at Sabetta.

DSME landed the order at $320 million per vessel, nearly 1.6 times more compared to regular LNG carriers, whose price stands at around $200 million, or $4.8 trillion for the total.

To successfully construct an LNG carrier capable of sailing through thick ice, DSME developed an auto-welding robot known as Caddy. The newly developed ship is also equipped with three propellers called “azipod thrusters,” which can rotate 360 degrees to maximize forward and backward sailing through ice.

“We’ve made history by delivering the world’s first icebreaking LNG carrier,” said a DSME spokesperson. “Through successfully delivering the remaining 14 ships, we hope to contribute to the company’s normalization.”

The delivery of the icebreaking LNG tanker could be used as leverage in DSME’s attempt to stay afloat in the midst of a continuous financial crisis, as it shows the company has cutting-edge technology.

Last week, the Financial Services Commission, the country’s top financial regulatory agency, and two state-run banks - Korea Development Bank (KDB) and Export-Import Bank of Korea (Korea Eximbank) - decided to inject an additional 2.9 trillion won ($2.6 billion) in yet another bailout plan for the shipbuilder, while asking other creditors to give the green light to a debt-equity swap as well as payment delay on outstanding debt.