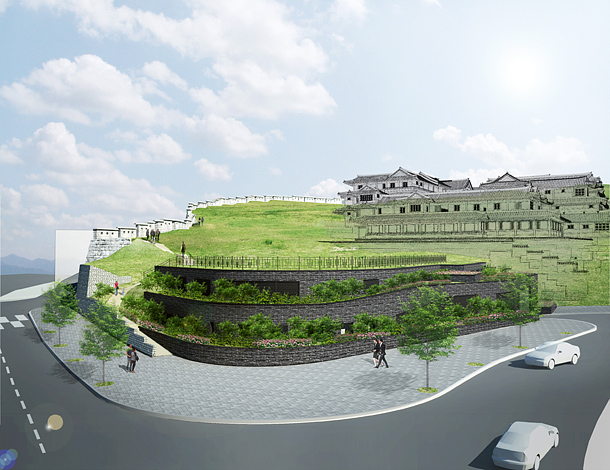 A computer-generated image of the Dasan Fortress Wall in central Seoul after the surrounding buildings are completely demolished. [HOTEL SHILLA]

Hotel Shilla revealed plans on Tuesday to develop the neighborhood surrounding the Dasan Fortress Wall in central Seoul into a tourism area.

The wall sits behind its Jangchung-dong hotel and near where the company plans to build an ambitious hanok-style hotel modeled after a traditional Korean home.

Despite the Dansan Fortress Wall’s cultural value as the old capital city’s defensive border dating back to the 14th century, its view was obscured by buildings constructed during Seoul’s rapid modernization in the latter half of the 20th century.

Hotel Shilla has begun demolishing the three-to-four-story buildings and clearing the site for construction of its traditional-style hotel this month. Once the demolition is complete, the wall will become more visible, and a new entrance will be built for tourists to access the fortress.

“Tearing down the old buildings surrounding the wall is just the start of our grand plan for Seoul’s only hanok hotel,” Hotel Shilla said in a statement. “We will continue collaboration with the district office to turn the fortress wall into a harmonious site of modernity and tradition.”

In addition, Hotel Shilla will offer support for cultural events in the neighborhood, starting with the Dasan Fortress Wall Art Madang. Madang means “market” in Korean, and the event, held twice a year, will take place again for a fourth time in May. It offers visitors opportunities to experience traditional Korean culture, including food, art exhibitions and performances.

A new program, the Fortress Wall Wedding Feast, will be added to the event. Jointly organized by the Jung District Office and Hotel Shilla, the event is a traditional outdoor marriage ritual that will feature one soon-to-be married couple.

The Jung District Office has already marked the area beside the Dasan Fortress Wall in Dasan-dong, central Seoul, to be developed into one of Seoul’s tourism assets. The wall is notable for showing four different methods of construction, as it was enlarged four times between the 14th and 19th centuries. Measuring 1.1 kilometers (0.7 miles) in length, the Dasan Fortress Wall is part of the 18.6-kilometer Seoul City Wall that runs through Dasan-dong and is said to be the best preserved among the surviving parts.

The Seoul City Wall, also known as the Hanyang Fortress, was part of the Seoul Metropolitan Government’s five-year plan to make it a Unesco World Heritage Site. However, the plan was put on hold after an advisory body for Unesco concluded the fortress should not be inscribed, as the structure is not much different from two other Korean walls on Unesco’s list.

The Seoul Metropolitan Government said Wednesday that it will prepare another bid in 2019. The Jung District Office’s plan to develop the area’s tourism and cultural assets falls in line with this initiative.

Last March, Hotel Shilla, a subsidiary of Samsung, acquired permission to build a hanok hotel from the Seoul government after four unsuccessful attempts. The company hopes the hotel, which will have 91 rooms designed in traditional style, will play a supportive role in the government’s effort to get the Seoul City Wall listed on Unesco.