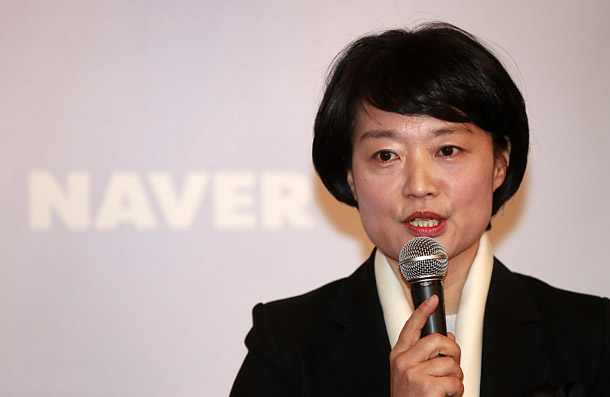 Naver CEO Han Seong-sook speaks during her first press conference on Tuesday in central Seoul since taking up the post on March 17. [NAVER]

Naver, operator of Korea’s top search engine, has been stepping up its development of artificial intelligence technology and is set to showcase its own autopilot system at the Seoul Motor Show later this week.

Han Seong-sook, the newly-inaugurated CEO of Naver, said the latest R&D push is part of a larger strategy to secure as much AI technology as possible and figure out how to best apply them to Naver’s various services, and make them lucrative.

“Many people wonder why Naver is working on autonomous driving,” she said in her first press conference on Tuesday since her appointment 10 days earlier. “What people do in a car - whether it’s listening to music or using a voice-recognition assistant to make phone calls or ask for information - it’s is very important for us.”

Han believes people will soon be more comfortable using voice assistants regularly and won’t simply ask but also listen to longer responses from Siri-like devices in the near future. But the company has yet to arrive at a stage where it can offer a clear direction for its autopilot technology, she said.

Naver will have a booth at this year’s Seoul Motor Show, which kicks off on Friday, and will unveil a prototype vehicle that works on its level-four autopilot technology developed by research arm Naver Labs. Level-four technology allows the driver to control the vehicle in nearly all circumstances. The company is the first tech firm to be a formal participant in the auto show.

Naver stands at a major crossroad. Since launching as a modest start-up in 1999, it has grown into the country’s biggest and most influential portal site. Now, it is in the process of evolving into a tech company with larger ambitions of creating a comprehensive software ecosystem.

“Naver may look like it has a lot of capital from the outside but is in a realistically difficult situation when it comes to competition with global peers like Google and Facebook,” Han said. “We believe a difficult battle is set to begin soon, and we are in deep agony over the scenario of failing to address the challenges in three years.”

Han highlighted a series of upcoming business plans, including a speaker based on its AI system Clova due out for this summer and a 60 billion won ($53.9 million) fund to support small businesses selling on Naver’s online retail channels and to provide software education to teachers and students.

In its drive to expand, Han emphasized that transparency will be key for Naver.

“We are an atypical company by Korean standards with no owner or largest private stakeholder,” she said. “I am tasked with the responsibility of doing business well and managing with transparency.”

Part of that effort includes a new feature on Naver’s search engine that allows users to track the fluctuation of most searched keywords, which goes into effect today.

Han, a former journalist, was nominated to the CEO post last October and given a six-month preparatory period.