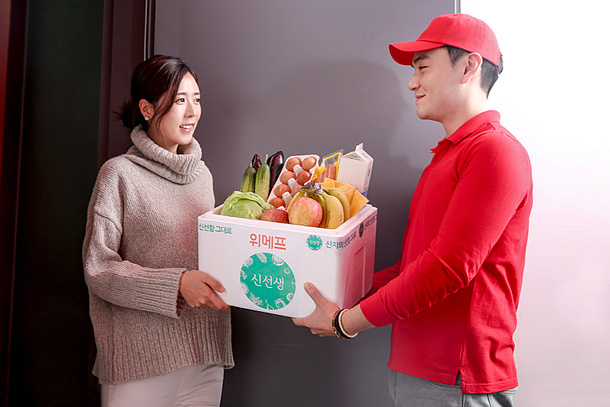 E-commerce platform operator WeMakePrice offers next-day delivery of groceries through its service Sinseonsaeng, a portmanteau of “fresh” and “mister” in Korean. Other sites like Auction, Gmarket and Ticket Monster have similar services. [WEMAKEPRICE]

With more Koreans ordering groceries from their smartphones and computers, operators of e-commerce platforms are in a competition to release fresh produce lines on their websites.

Gmarket launched a service on Monday called Gtable that provides seasonal fresh food from farms around Korea. The online retailer will oversee the entire process, including selection of fruits and vegetables, washing and packing them, and delivery.

For Gmarket, whose main business model is providing an online sales channel to individual merchants, the launch of an in-house service with such high degree of direct management is rare.

“We noticed that more consumers were purchasing fresh food online,” said Park Young-geun, head of the fresh food team at Gmarket. “The service aim is not just delivery but to suggest a more healthy lifestyle to our users.” 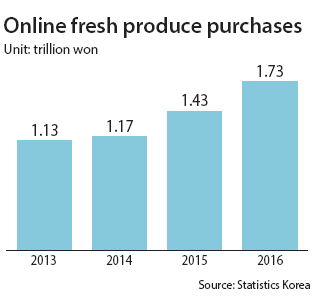 The service is starting with nine products including salads, oranges, nut mixes and vegetable sets, mainly priced between 10,000 won ($9) and 30,000 won.

For the past decade, the dominant retail channel for fresh food has been brick-and-mortar discount chains. Buying groceries online, though, is becoming a more popular option, especially among young people living alone who don’t need to buy in bulk and childless couples who don’t consume as much as families with children. Both demographic groups are growing in Korea.

As a result, many online retailers with fresh food services are packaging their groceries in small sets. Lotte.com’s Garak Store, for example, which delivers vegetables and fruit purchased from daily wholesale auctions at Garak Market, a traditional Korean marketplace in Garak-dong, southeastern Seoul, lets consumers buy in small quantities, even by the gram.

The market for online groceries is a promising one. Last year, 1.73 million won worth of fruits, vegetables seafood and meat were bought online, according to Statistics Korea, a 20 percent increase from 2015.

Among its peers, Auction was the first to spot an opportunity in selling fresh food online. In 2014, it launched the service Farmer Story, which directly connected producers and consumers. Farmer Story posted six-fold sales growth during last year’s second half compared to 2014.

WeMakePrice was the next online retailer to enter the market, in October last year, with Sinseonsaeng, a portmanteau of “fresh” and “mister” in Korean. The company is targeting single-person households with its small packaged groceries and fast delivery. During the first nine weeks, the number of orders jumped almost fivefold and sales volume increased fourfold.

Ticket Monster jumped on the bandwagon in January with Tmon Fresh. Apart from the small packaging that rival services offer, Tmon Fresh also gives customers the option of choosing when to receive deliveries. The company reported a 240 percent increase in grocery sales after Tmon Fresh’s launch.

SK Planet, operator of online retail platform 11st, in December acquired the start-up Hello Nature, which runs a service that sends groceries to consumers within 24 hours.

For a long time, fresh food has been considered an exception in an age when people can buy clothing, electronics and even daily necessities like diapers and toilet paper online. One concern is that something could go wrong with the produce during transportation. Another is prevailing convention that fresh food ought to be bought in person, where customers can thoroughly examine the produce themselves and ask vendors questions.

This hesitance means credibility has become an essential differentiating factor for competing e-commerce grocers. On top of fast delivery, companies are making sure consumers know that their food teams are putting in extra effort to ensure product quality. WeMakePrice, for instance, touts its more than 2,000-square-meter (21,000-square-foot) refrigeration facility in Gwangju, Gyeonggi.

“We believe online shopping platforms have a chance in the groceries market if they can prove that they can provide products of freshness and quality equal to the level of discount chains,” said Ha Song, head of the direct buying team at WeMakePrice.