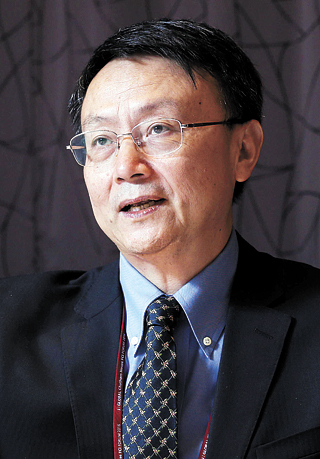 Jia Qingguo, Dean of the School of International Studies at Peking University.

Chinese scholar Jia Qingguo, dean of the School of International Studies at Peking University, thinks Beijing’s economic and cultural retaliation against Korea over the deployment of the U.S.-led antimissile system is inappropriate.

Beijing has been increasing its backlash against Seoul over its decision to move along with the deployment of the Terminal High Altitude Area Defense (Thaad) system to a golf course in Seongju County, North Gyeongsang. This includes measures against Korea’s entertainment industry and cultural cooperation, as well as targeting Lotte Group’s businesses in China.

But Jia pointed out that the Thaad issue “does not affect China’s key interests enough to warrant a war,” nor does it go against its territorial interests, as he sat for an interview with the JoongAng Sunday on March 14, arguing that economic sanctions against Seoul are an inappropriate approach.

Jia, an expert on Chinese diplomacy and Sino-U.S. relations, is a member of the Standing Committee of the National Committee of the Chinese People’s Political Consultative Conference. Earlier this month, at the meeting of the conference, Jia recommended against China “rashly” using economic sanctions measures, which he said should only be employed under very “strict conditions.” He also said that one solution to the issue would be Seoul seeking a way to genuinely reassure China that the range of the battery’s powerful X-band radar truly is limited.

Beijing has adamantly protested the deployment of the Thaad system to Korea, saying it goes against its strategic interests, and demanded its withdrawal. It is especially wary of the X-band radar, which it thinks will be used by the United States to spy on it, despite Washington claiming it will limit its range to monitor North Korea.


Q.Your suggestions on how to respond to the deployment of the Thaad system in Korea in the recently concluded Chinese People’s Political Consultative Conference have drawn a lot of attention. Can you explain your recommendation and the reasoning behind it?


What sort of strict conditions?

First, for the sake of the nation’s key interest, or in other words, in a situation where the life or death of the country depends on it. Second, if there are big challenges to international law related to the key interest of a country, such as the treaty banning weapons of mass destruction or the convention on maritime safety. Third, when there is a serious human rights problem such as genocide or ethnic cleansing. Under such strict circumstances, many nations impose economic sanctions on a particular country.


Then does the deployment of Thaad to Korea constitute going against China’s key interest?

In my opinion, the Thaad issue without a doubt is a challenge to China’s security. However, I don’t think it is an issue that calls for all means to be used to oppose it or even a war to resolve it. Key interest refers to the national interest when all measures have to be employed to protect the country when it is invaded or there is war. In my opinion, the deployment of the Thaad battery is not to that point. Other countries in the past have monitored China or conducted reconnaissance, so we need to make a comprehensive judgement.


Then what do you think of as being an appropriate response by China to the Thaad issue?

When dealing with issues of bilateral relations, it has to be dealt with in detail depending on the nature of the problem. Military issues have to be dealt with using a military approach, economy-related problems with economic approaches and political issues through political approaches. When other measures are linked together, the issue becomes complex and difficult to deal with. China will need to take the necessary military measures to decrease the security threat due to Thaad. First, China will have to readjust the deployment of its missiles, and if necessary, it can make the Thaad base as an attack target. Second, it can technically disturb the Thaad radar’s signal. In order to prevent the monitoring and probing inside of China, it will protect China’s nuclear second-strike capabilities. Even militarily or theoretically, such measures have to be taken appropriately. There has to be political efforts as well. China of course has to speak with South Korea and the United States to protest and oppose the Thaad deployment. Not only this, but it has to resolve the root of the Thaad deployment, the North Korean nuclear problem. It has to cooperate with countries related to the North Korea nuclear problem and impose stronger pressure on North Korea. A reasonable method to persuade North Korea has to be found so that it gives up on its nuclear plan. If North Korea does not have nuclear weapons, neither the United States nor South Korea will have reason to deploy Thaad. South Korea likewise would have no reason to allow the United States to deploy that Thaad battery there.


Did the Chinese government accept your suggestion?

I do not know, but there is reason to my perspective. That is why I made such a suggestion to the government.


The Chinese government has been consistent in its position opposing the Thaad deployment, but is there a proposition that would be acceptable to Beijing aside from withdrawing the deployment?

Wouldn’t there be something? There could be a method of using a lower-functioning radar, though we would have to review the technical aspects. The Korean government says that the radar included with the Thaad system has a detection range of 600 to 800 kilometers [373 to 497 miles], so it would not have a big impact on China. However, Chinese experts say that the Thaad radar has a range of 2,000 kilometers. Who is correct then? If that is the case, South Korea and the United States have enabled China to believe that the range of the radar would be 600 to 800 kilometers. If that is true, there would not be a big issue. However, if there is no way to make China believe this, then the deployment of the Thaad has to be delayed or withdrawn.


But the Chinese government has turned down the Korean and U.S. government’s attempts to explain about this issue.

That is because there is not enough trust. It needs to be proposed again at a higher level. After that, a way to resolve this has to be raised. Theoretically speaking, the Thaad radar’s range of detection may be 600 kilometers but China has no means of verifying this, and it may be switched to 2,000 kilometers at any time. Of course, Korean officials have told me this is not easy to do, and that to change the range of the radar, it will have to be taken back to the factory, and in such a case, China will be able to track this. However, we still do not know this for certain. The issue is to find a way to reassure China. It is most important to find a way to convince China that the Thaad system is not a serious threat to its safety.


It is regrettable Korea and China are facing strained relations as this year marks the 25th anniversary of bilateral ties between our two countries. How long will this sort of tension continue?

There is a possibility that this situation will continue for quite some time. Korea has to find a solution. The root of the issue is because of a decision that Korea made, not one that China made. I say this once again, a way to reassure China has to be found, on how to guarantee to China that the detection range of the radar is limited to 600 kilometers, and that it won’t be switched to 2,000 kilometers.


Next month, Chinese President Xi Jinping heads to the United States to meet with President Donald Trump. There is expectation that the Thaad issue will be discussed — do you see some sort of resolution coming out of it?

In my personal opinion, unless the United States raises the issue first, China will not raise it.


Why do you believe so?

Because there is no immediate solution [unless Washington proposes to withdraw the Thaad system]. From the U.S. perspective, it has its own reason to deploy the Thaad system. North Korea not only developed nuclear weapons but medium and long-range missiles. Combining the two, it can reach the United States, which means North Korea is a real threat to Washington.

However, China cannot go beyond its position that Thaad is a threat to its security interest. Thus, in my opinion, everybody will avoid this issue. Of course, there is a possibility that Trump may say that the Thaad issue should not have an effect on South Korea-China relations.