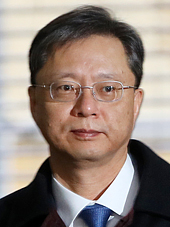 When an independent counsel tried last month to detain Woo Byung-woo, ex-civil affairs secretary under former President Park Geun-hye, they accused him of abuse of power, dereliction of duty, violation of the special inspector law and perjury at a National Assembly hearing, all of which Woo denied.

The counsel filed a detention warrant for him but it was rejected by a local court due to a lack of evidence.

While prosecutors are now making another attempt at the abuse of power scandal circling Park and her closest aides, an exclusive look at Woo’s past warrant sheds light on specifically how he managed to manipulate government affairs.

The warrant, exclusively acquired Monday by the JoongAng Ilbo, claims Woo intervened in the demotions of public servants who resisted Blue House orders, particularly in the Ministry of Culture, Sports and Tourism.

According to the warrant, in November 2015, Woo ordered his presidential civil affairs secretary’s special inspection team to force the Culture Ministry to find an excuse to probe Seo and Lee and punish them.

Woo was acting on behalf of his close friend, the editor-in-chief of a magazine that was contracted by the Culture Ministry to produce its periodical, “Weekly Gonggam.” Gonggam is Korean for empathy.

The chief editor, surnamed Kim, accused Seo of forcing his media group to sign a contract with a freelance writer who formerly worked at the magazine and with an online PR company that used to promote the published work. Upon receiving the order from Woo, the special inspection team summoned an inspection officer from the Culture Ministry, surnamed Baek, and pressed him to carry out the probe.

Baek investigated Seo and Lee for two weeks but found no reason to penalize them, and reported his conclusion to the special inspection team on Nov. 23, 2015. The presidential inspectors fumed, threatening Baek’s career.

The editor-in-chief complained to Woo, who then ordered his junior in the presidential civil affairs office to force the special inspection team to look into the Culture Ministry’s investigatory practices.

The special inspection team conducted a warrantless raid on Baek’s office on Jan. 26, 2016, confiscating his computer and work documents. Three days later, the team blackmailed Baek, forcing him to “come up with a way” to punish Seo and Lee. Baek was questioned for nearly 13 hours.

In February 2016, Baek was purged as section chief at the Presidential Committee on Regional Development after Woo’s junior at the presidential civil affairs office told Park Min-kwon, then-first vice culture minister, that Baek had “a lot of issues and needs to be sent elsewhere.”

Baek’s successor was told by the special inspection team to re-investigate Seo and Lee, and they were eventually punished, though exactly how is unknown. Woo’s junior, Yoon Jang-seok, still works at the presidential office and denied any wrongdoing when recently asked by reporters from the JoongAng Ilbo.

Prosecutors who are probing former President Park and her aides, including Woo, raided the presidential offices of Woo, Yoon and the special inspection team last Friday, and said they intend to look into Woo’s abuse of power charges.