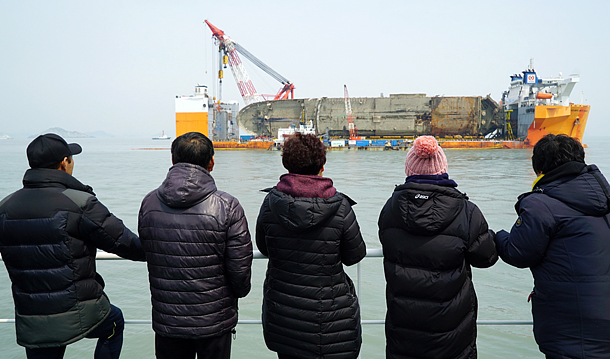 From Paengmok Harbor in Jindo, an island in South Jeolla, on Tuesday, family members of missing Sewol victims look at the wreck of the ferry laid on a semi-submersible ship. The Oceans Ministry announced Tuesday that some bone parts and shoes were found on the semi-submersible. They may be from nine missing victims. [YONHAP]

Six bone parts and some shoes were discovered Tuesday morning on the semi-submersible ship on which the wreck of the Sewol ferry was hoisted last weekend, maritime officials said, possibly remains or belongings of nine missing victims of the tragedy.

Lee Cheol-jo, head of the Sewol salvaging committee of the Ministry of Oceans and Fisheries, said during a press briefing that each bone was 4 to 18 centimeters long (1.6 inches to 7.1 inches).

Authorities have yet to confirm whether any of them belonged to the nine missing people.

The number of shoes discovered and their sizes were not disclosed.

The Oceans Ministry is cooperating with the Ministry of Health and Welfare and also the National Forensic Service in the hunt for further clues, he said. Officials were dispatched to the scene for DNA testing, which will likely take “two to three weeks or more.”

The bones were found on the deck of the semi-submersible ship at around 11:25 a.m. Tuesday. The Sewol was raised from its watery grave last Saturday almost three years since it sunk off Korea’s southwestern coast on April 16, 2014, and workers have been draining the wreck of seawater and oil.

The remains may have been flushed out of the interior of the ship with the drained water, said Lee. All operations to fasten the Sewol wreck onto the semi-submersible ship have been suspended, he added.

The halt will not affect the ministry’s plan to transfer the ferry to a port in Mokpo, South Jeolla, 105 kilometers (65 miles) away, which was supposed to start Thursday, said Lee.

Among the nine missing victims were four students and two teachers from Danwon High School, a 51-year-old female passenger and a father and son.

They were among 476 passengers on the Sewol ferry leaving Incheon for Jeju Island, when the ferry capsized mid-way.

The ferry, lifted from the seabed 44 meters under the surface, was hoisted completely out of the water on Saturday evening and is now being drained.

After it reaches Mokpo New Port around April 5 or 6, investigations on the cause of Korea’s worst maritime disaster could start as early as April 10.