Fine gunk in Seoul’s air is worst ever recorded

Fine gunk in Seoul’s air is worst ever recorded 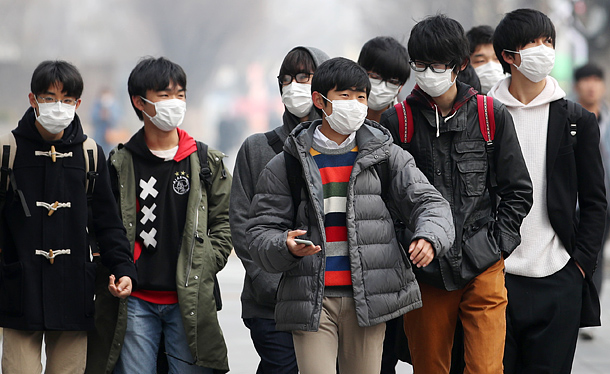 The concentration of fine dust particles in Seoul’s air from January to March was the worst since the Seoul Metropolitan Government started measuring it, according to an analysis by the JoongAng Ilbo.

Particles less than 2.5 micro-millimeter in diameter - about thirty times smaller than the width of a human hair - can travel through the respiratory tract and reach the bloodstream. The World Health Organization described fine dust particles as carcinogenic in 2013.

When a warning is issued, children, elderly and those with lung or heart conditions are advised to remain indoors if possible. People may suffer the following effects from breathing in such polluted air: eye irritation, lung and throat irritation, breathing issues and, over long periods, lung cancer and even low birth weight, according to the U.S. Center for Disease Control and Prevention.

The air quality in Seoul can be checked daily on the city government’s website.

Some experts blamed China for the dangerous air.

“Some 70 to 80 percent of recent air pollution by fine dust particles can be attributed to China and other international forces,” said an employee of the National Institute of Environmental Research, which is run by the Ministry of Environment.

But others said the national government needs to do more to address the worsening air pollution.

“While the influence of yellow dust from China on the state of air quality here is big, the government needs to do something on its own to reduce as many fine dust particles in the air as possible,” said Dong Jong-in, a professor of environmental science at the University of Seoul, eastern Seoul. “National efforts here must be increased to help the people cope with air pollution.”

The ministry promised last month that it will do what it can to lessen the severity of air pollution, including taking some cars off the road, although the policy will be applied only to government officials. Ordinary people will be asked to voluntarily not drive on even or odd dates depending on their license plate numbers.

The policy has not been applied once this year, however, because of the complicated requirements: there needs to be a fine-dust pollution warning, followed by a concentration of higher than 50 micrograms until 4 p.m. that afternoon, and a forecast that the concentration will exceed 101 micrograms the next day for at least three hours.

“The ministry needs to start rolling out the policy and stop waiting for these ‘requirements’ to be met,” said Choi Ye-yong, head of the Asian Citizen’s Center for Environment and Health, a civic-group in central Seoul.

“Whenever there are more than 50 micrograms of fine dust particles per cubic meter of air, the ministry should start the car-ban on government officials and release notices for civilians to take part actively.”