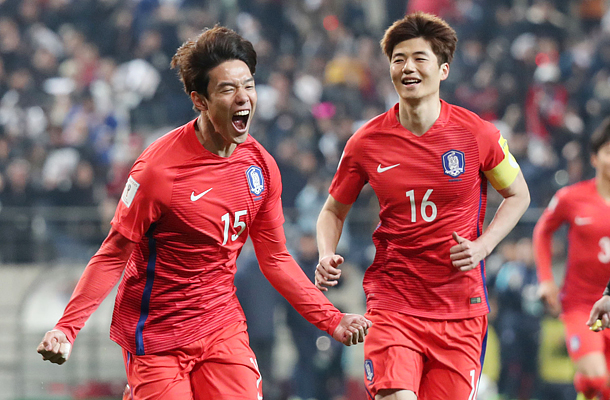 From left, Hong Jeong-ho, center back for Jiangsu Suning, and Ki Sung-yueng, center midfielder for Swansea City and captain for the Korean national football team. Hong celebrates after scoring a goal against Syria in the final World Cup qualification match at Seoul World Cup Stadium on Tuesday. [YONHAP]

They may have won, but it wasn’t enough to erase doubts towards Uli Stielike, manager of the Korean national football team.

Ki Sung-yueng, center midfielder for Swansea City and captain of the Korean national football team, stood out in the game, but that was it.

The Korean national football team won its match against Syria at the Seoul World Cup Stadium on Tuesday but they are not yet guaranteed a spot in the 2018 Russia FIFA World Cup.

After losing to China 1-0 on March 23, they barely won against Syria 1-0 at home with Hong Jeong-ho, center back for Jiangsu Suning, who landed a goal in the fourth minute. Despite this win, the Korean national football team is still getting doubt about their strategy.

As expected, Stielike showed another weakness in the team’s strategy. Stielike changed his strategy by using the 4-2-3-1 and 4-1-4-1 formations, but they weren’t very useful.

Stielike thus called Koh back to the bench.

The only consolation in the game was Ki, who was subbed in for Koh. Once Ki got in, he actively engaged in offense and produced chances to strikers with his accurate passes.

But upon completion of the game, Ki criticized the team’s performance by saying how the level of play exhibited in the game was undeserving of its name.

“The players need to wake up,” Ki said after the game. “There are times when we make mistakes but as a player on the national team, they need to overcome the pressure. If we play like this at home, then we have a lot of problems.”

Since Ki was first named on the national team, he went through five different managers.

During the interview, Ki expressed how there are more problems for players than the manger.

“No matter how good a strategy the manager brings to the team, if the players can’t play accordingly, then it’s useless,” Ki said.

Now, the Korean national football team has until June to figure out their problems.

“The national team has the responsibility to produce results in a short period of time,” Koo Ja-cheol, midfielder for FC Augsburg, said. “But through emotional pressure, the players lost confidence in the game. They need to get some mental strength.”

The top three teams in Group A - Iran, Korea and Uzbekistan - have won all their matches on Tuesday, keeping their points and standing the same.

With that, the Korean national football team has higher pressure than they did before because they will have to win the remaining three games.

Of the three games, the Korean national football team will play away against Qatar in June and Uzbekistan in September.

In between, they’ll be hosting Iran in August, which is determined to be the toughest game from Korea’s recent record of four straight losses to Iran.

“The players have to play well on the field,” Son Heung-min, winger for the Tottenham Hotspur, said. “They can’t be playing irresponsibly.”

Because Korea and Uzbekistan are only one point apart in the standing, the final match against Uzbekistan will be the determining factor in which team advances to the World Cup.

The top two teams from each group will receive automatic berth onto the FIFA World Cup and the third ranked team will determine its participation in the World Cup through playoff games.