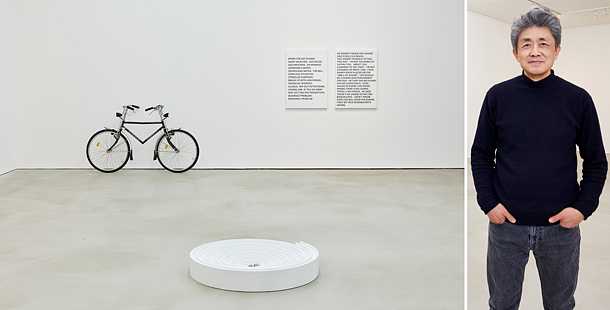 Conceptual art pieces are often shunned by the non-expert audience, as the works, many of which feature the re-contextualization of everyday objects, tend to lack visual impact and look very dry. And the ideas that they carry tend to be difficult to understand immediately.

But the exceptions can be found in two ongoing exhibitions in the art zone east of Gyeongbok Palace in central Seoul. They are Korean artist Ahn Kyuchul’s solo show titled “Words Just for You” at Kukje Gallery and British artist Ryan Gander’s solo exhibition titled “Soft Modernism” at Gallery Hyundai.

Their themes and main concerns are different from each other but they share some common points - there is a witty, quietly lyrical, and storytelling quality to the artworks, which are not difficult to understand, but not superficial, either.

“Words Just for You,” an installation work by Ahn, from which his solo show title comes, also has these qualities. It looks like a black monochrome painting from a distance in the white cube of the gallery but, up close, it appears to be a black cushion hanging on the wall. The viewers are led to stand close to it and speak toward it. Then their voices are absorbed by the soft felt of the cushion.

“It is a vanishing point for the world’s words, a black hole that draws in our secrets and a pathway to the eternal silence beyond truth and lies,” Ahn told reporters last month at the gallery.

Although it is related with the failure of communications and solitude that the 62-year-old artist has repeatedly dealt with, the warm and soft feel of the work also has healing qualities.

The work is one of the 25 pieces now on view at the exhibition.

Another installation “Lingering Time I” consists of gently-sloped wooden tracks and a wooden ball, which the viewers are encouraged to roll on the tracks. As the ball slowly rolls down “through many twists and turns like those in our life,” for a much-longer time than it would take if in free fall, the viewers meditate on their paths in life, the artist said.

British artist Ryan Gander’s “I is…(xii)” (2015) which looks like a chair covered in a white sheet but is actually a marble sculpture, is part of his solo show “Soft Modernism” at Gallery Hyundai. [GALLERY HYUNDAI]

“I try to link objects with stories of our life, speak with objects in an easy, common language,” the artist said.

His work “I is…(xii), which looks like a chair covered with a white sheet but is actually a marble sculpture, and other small sculptures that depict a balloon and a dropped ice cream cone, show the source of imagination and sense of loss he experienced in his childhood and recently recalled through his daughter.

In another series of his works including hairy sculptures based on Modern master George Vantongerloo, the artist humorously distorts and re-writes art history.

Although conceptual art is regarded by art historians as being post-modern, he calls his work “Soft Modernism” like the exhibition title, saying that a lot of postmodern art is full of “ego” and often “frivolous ego-centric nonsense.”

His mockery about contemporary people’s obsession with ego, which lead to the phenomenon of selfies, is reflected in some works on view including his self-portrait as a zombie in the work “Admire Your Own Willingness to Play.”

The “Words Just for You” exhibition runs until Friday at Kukje Gallery. Admission is free. For details, visit www.kukje.org or call (02) 735-8449.

The “Soft Modernism” exhibition runs through May 7 at Gallery Hyundai. Admission is free. For more information, visit www.galleryhyundai.com or call (02) 2287-3500.