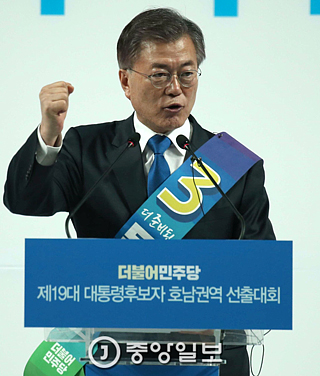 People look for myths or ideology when their stuffy reality is a series of contradictions and despair. Myths and ideology are often the guiding light to break through crisis. But they could also be the tie that binds people and brings down the nation. U.S. President John F. Kennedy said, “The great enemy of truth is very often not the lie — deliberate, contrived and dishonest — but the myth — persistent, persuasive and unrealistic.“ In other words, a lie disappears when the truth is revealed, but a myth becomes stronger no matter how truth is presented.

For example, the late president Roh Moo-hyun’s myth that nuclear development is North Korea’s self-defense is more treasured when evidence of aggression by the Kim Jong-il and Kim Jong-un regimes are revealed. The opposition Democratic Party’s presidential runners such as Moon Jae-in and Lee Jae-myung are convinced by the myth. They have an ambiguous stance on — or vehemently oppose — the Thaad deployment because they don’t consider North Korea’s nuclear program is for attacks.

But I am worried that the Sewol ferry and candlelight myths are reduced for the purpose of administrative change for Moon Jae-in. Monopolizing myths is a dangerous sign in a democracy. If Moon is elected president, I hope that he does not use the Sewol ferry and candlelight myths as a tool to punish and remove his opponents. Those who believe in Moon’s sincerity and dignity will say it would not happen.

But power can be intoxicating. At first, a person seizes power, then the power swallows the person, especially one who has many supporters around him. Lately, I see something in Moon that I hadn’t seen six months before the candlelight protests. First, he seems to have given up on external extension and moderate stance he had pursued before. He now seems to care more about the Korea Confederation of Trade Unions, Korean Teachers and Education Workers Union, National Union of Media Workers, Civil Servants Union and major companies’ labor unions. It must be his psychology after riding on the candlelight and comfortably gaining top rating. He has no motivation to persuade his opponents or offer policies to integrate. Moon has learned the efficiency of power as people voluntarily come to join his camp.

The second is his undemocratic words. At an MBC television debate, Moon said, “Media is one of the areas where long-standing evils should be eradicated, and MBC is no exception.” He asked why the television company went on with appointing a new president. Moon’s supporters may cheer that he bravely addressed the problem. But I thought it was undemocratic that fists come before law.

Moon said that Park Geun-hye’s blacklist was an evidence of dictatorship, but to me, it was a worse dictatorship to openly point to the president of a certain media company as a deep-rooted evil to be eradicated. There are rumors that media executives who support Moon are vying for the position of president not only at MBC but also KBS.

Third, some grasses bend even before the wind blows. On the detention warrant for Park Geun-hye, Hong Joon-pyo, who is running for the Liberty Korea Party nomination, claimed that the prosecutors only consider one person in mind. “Grasses bend when wind blows, but the prosecution bends even before the wind blows,” he said. Not just the prosecution and the National Intelligence Service but also government ministries, public agencies, judiciary, corporations, universities and civil society are all bending voluntarily. On online podcasts and radios, self-proclaimed enlightened citizens who support Roh and Moon boast their new power and say, “What’s wrong with populism?” It is a strange scene in Korean politics that Moon Jae-in seems to have power before the election.