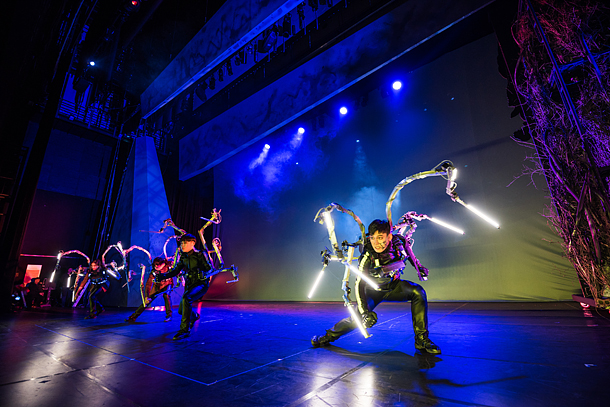 Actors clad in wearable robots perform in “Robot Tree,” an experimental performance that adopts the technologies of robots and drones. [DPI]

An experimental performance is underway at Theater Yong in the National Museum of Korea in Yongsan District, central Seoul, where actors perform clad in wearable robots and flying drones.

“Robot Tree” aims to break the boundaries of technology and art by applying future technologies to performance, the first of its kind in Korea.

The show, quite appropriately, tells a story of how civilization is devastated by technology but regenerates through humans, and leaves the audience with the big question, “How can robots and humans coexist in harmony?”

Set in a world dominated by robots, a girl and her parents are captured and forced to put on wearable robots. The girl however escapes and embarks on a journey to obtain the sound waves of life that can be found in a tree.

Organizers said through a press release that they attempted to “juxtapose the geometry and coldness of machines” and “colors and fluidity of [mankind].”

Robots and drones stand for the former, while the girl and her mother in particular represent the tree of life and regeneration. The antagonism between machines and the humans are accentuated through dramatic media art installations and percussive music playing in the background.

Directed by Lee Dong-il, who teaches at Sogang University and directs experimental performances, the technological spectacle kicked off its four-day run on Tuesday. Louis-Philippe Demers, a robotic artist and a professor of art, design and media at Nanyang Technological University in Singapore, also took part in the project. Demers has participated in many performances including shows with the famous Cirque du Soleil.

Actors use six sets of wearable robots while performing, and all have been specially made for the show. A total of 25 drones are used.

The actors operate the robots as well as drones throughout the profound performance. Naturally, the reviews are mixed. Some critics say the technological aspect did not seem to have melted into the story and distracts from its flow.

Organizers say they wanted to present a possibility to audiences. Lee told Korean media that he wanted audiences to ponder the question, “What really constitutes an artistic merger?,” while Demers said in order to apply elements of robot in performances, artists need to learn how to communicate with robots, and the performance itself is a kind of research on the topic.