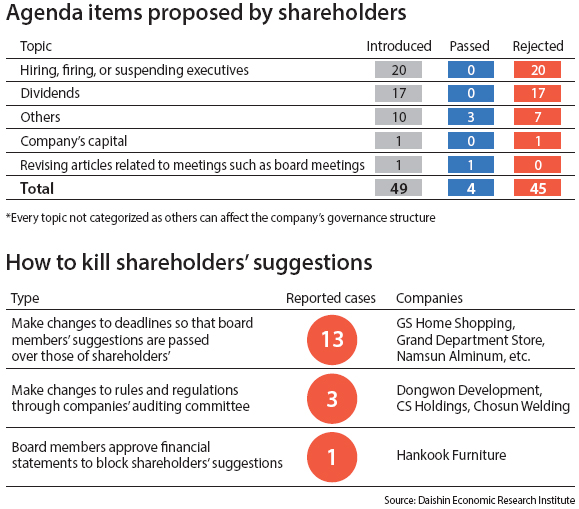 “I am so mad right now and I would like to rename Choi Hyun-man, Vice Charman of Mirae Asset, as ‘Choi 50 won,’” said one shareholder. Another shareholder who held shares of Daewoo before it was merged with Mirae Asset complained about an unfair merger ratio between the two companies.

Capro, a petrochemical company, held its shareholders’ meeting on the same day. Shareholders discussed whether to approve another term for Park Seung-Eon, President and CEO of the company, even before meeting was held.

The company’s biggest shareholder, Hyosung, which holds 11.65 percent of total shares, didn’t want to approve another term for Park due to the weak performance of Capro over the past few years. The second-biggest shareholder, Kolon, which holds 9.56 percent, sided with Hyosung. However, the result that came out was something that no one has expected.

But minority shareholders, which account for 78.3 percent of the shares, approved Park’s extension.

Minority shareholders in Korea are starting to stand up for their rights. They believe that in the past, the agendas at shareholders’ meetings were set by - and benefitted - large stakeholders, sometimes at their expense.

And even outsiders are starting to make their marks on shareholder meetings.

Kwon O-kyung, a professor of electronic engineering at Hanyang University, was recommended to participate in LG Display’s shareholders’ meeting on March 23 as an independent or non-executive director. But Daishin Economic Research Institute, which was a consultant for the meeting, disapproved of Kwon’s participation because he worked as an adviser to the company in the past. LG Display backed Daishin’s disapproval.

Analysts say it is positive thing that shareholder meetings are being shaken up.

“In the United States, shareholders began getting involved in the discussions 30 years ago and Japan, which adopted the stewardship code three years ago, saw a positive impact on raising the value of the market,” said Chang Hwa-tak, a researcher at Dongbu Securities.

The stewardship code is a set of guidelines encouraging institutional investors to execute their voting rights in a more responsible manner and engage in the creating of sustainable, long-term corporate values.

“A rise in the number of active shareholders will raise market prices in the country as well,” Chang said.

However, the impact of minority shareholders on companies’ policies is still limited.

According to Daishin Economic Research Institute, there were 66 agenda items introduced by shareholders at this year’s shareholders’ meeting of companies listen in Korea. In order for a shareholder to get an item on the agenda, he or she needs to have owned at least 1 percent of the company’s shares for more than six months or to currently own more than 3 percent of the shares. Only four of those agenda items were approved at meetings and only one could actually change the company’s governance structure.

“Shareholders need to submit suggestions six weeks prior to the meetings and companies can announce what they will discuss at the meeting just two weeks before they are actually being held,” said Chung Sun-yeop, a researcher at Daishin. “Companies can strategically choose what will be discussed and what will not.”

GS Home Shopping decided to set its dividend for the year at 7,000 won per share at a shareholders’ meeting held March. 17. This was the amount agreed to by board members. Shareholder SC Fundamental unsuccessfully proposed 8,000 per share.

“It is understandable that companies’ governance structures might be breached if regular shareholders are expressing their opinion excessively,” said Hwang Sei-woon, head of capital markets department at Korea Capital Market Institute.

“However, we are not at a level to worry about such issues. Expanding the opportunities for minority shareholders and institutional investors to participate more actively in the voting processes can help companies operate their businesses more transparently and improve their performances.”