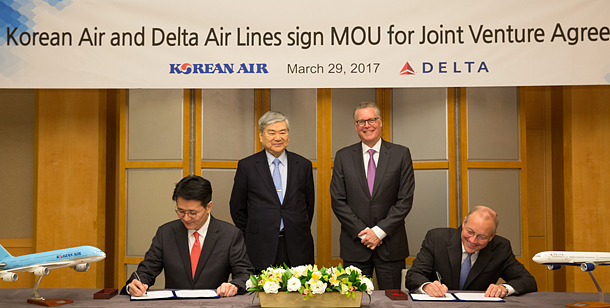 From left, Cho Won-tae, president and COO of Korean Air; Cho Yang-ho, chairman and CEO of Korean Air; Ed Bastian, CEO of Delta; and Steve Sear, president of Delta’s international business, sign a memorandum of understanding to form a joint venture between the two companies on trans-Pacific routes in Incheon on Wednesday. [KOREAN AIR]

Korean Air, the nation’s largest airline, signed a memorandum of understanding on Wednesday with the world’s largest air carrier, Delta, to strengthen their presence in trans-Pacific routes through a joint venture, the strongest level of partnership among airlines.

The agreement offers customers expanded travel options from both airlines’ flight networks along with shared facilities and mileage programs. Rather than forming a separate corporation, the two airlines will fully integrate businesses on trans-Pacific routes by sharing costs and revenue on flights and coordinating schedules.

The joint venture is a stronger form of cooperation than codeshare agreements, which allow two or more airlines to merely share seats on the same flight; and airline alliances, which might involve shared facilities like sales offices, maintenance facilities, check-in counters and lounges as well as mileage systems.

Once the agreement is finalized, the two are expected to offer a combined service network of more than 290 flights in the Americans and 80 in Asia, according to Delta.

“This joint venture will benefit our customers by providing more convenient connection schedules and widen their opportunities in earning mileage,” said Korean Air Chairman Cho Yang-ho. “With this agreement, we will reinforce Incheon Airport’s position as a major international hub in Northeast Asia and support the growth of Korea’s aviation industry.”

Based on the memorandum of understanding, the two companies will further negotiate details of the cooperation, which will include codeshares, frequent flyer programs and strategies to grow jointly in the trans-Pacific market. The two are also considering co-location at key hubs to provide a seamless passenger and baggage transit experience.

The set date for finalizing the contract has not been disclosed. The deal also needs regulatory approval from governments before taking effect.

Such close partnerships have been growing prevalent in the aviation world since 2009 as it helps airlines deliver more flying options to consumers while also growing their business with less risk incurred from adding new routes themselves.

All Nippon Airways CEO Shinya Katanozaka noted last year that passengers to and from the United States doubled in the five years since it began a joint venture relationship with United Airlines.

Similar benefits have been reported from joint ventures between American Airlines, British Airways and Iberia on trans-Atlantic services.

Delta itself has already formed two joint ventures on trans-Atlantic routes, with Air France-KLM and Alitalia, and with Virgin Atlantic.

“This agreement deepens our longstanding partnership with Korean Air and will provide the global access and seamless service our customers demand,” said Delta CEO Ed Bastian.

Korean Air and Delta have a close relationship as founding members of global airline alliance SkyTeam. Delta and affiliated carriers currently have service to 323 destinations in 57 countries, while Korean Air services 132 cities across 46 countries.