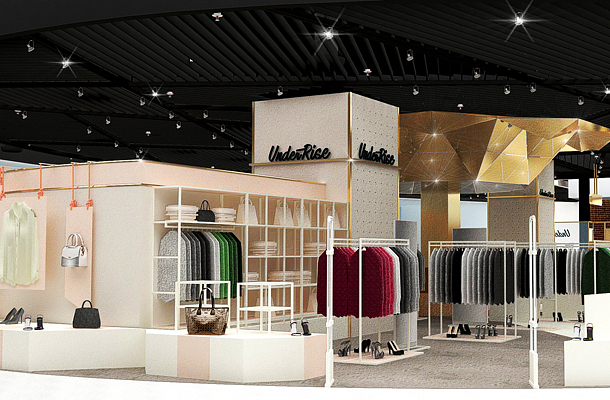 It will be marketed in its department stores and in dedicated retail stores in trendy Seoul neighborhoods.

The company announced Wednesday that the first Under Rise boutique will open Friday on the second basement floor of its Daegu branch.

It will be over 400 square meters, which is equivalent to about eight regular brand boutiques. Although its main focus will be on fashion, the store will also have accessories and lifestyle goods.

Under Rise will cater to young, trendy consumers in their 20s and 30s.

“We plan to expand the range of product sold to cosmetics and stationary goods, as the store targets trend-conscious consumers,” said Jang Kyo-soon, a director for the fashion business team at Hyundai Department Store.

“One of the big goals of Under Rise is to support the development of domestic fashion brands with potential that are losing ground to global SPA brands.”

SPA, or fast fashion brands, include Zara and Uniqlo.

To encourage young designers to become part of the brand, Hyundai Department Store will cover all expenses of operating the store from interior design costs, employee salaries and marketing.

It will also hold events twice a year in which designers can display their products.

“We understand that for young designers, which we consider Under Rise’s main business partners, operation costs would be a burden,” said a company spokesman.

“Such support is part of our effort to help them focus solely on strengthening their product quality.”

Hyundai will start launching dedicated Under Rise stores in hotspots around Seoul such as Itaewon and Garosu-gil starting from the second half of this year.