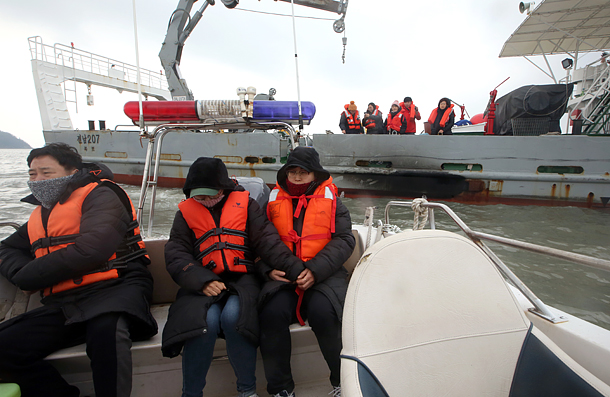 Family members of Sewol ferry victims whose remains have yet to be recovered return on a boat on Wednesday from the semi-submersible ship where the wreck of the ferry is laid. They were disappointed at the news that the bone parts found on Tuesday turned out to be those of a pig. [JOINT PRESS CORPS]

After the confusion involving the bones discovered on the Sewol ferry, which turned out to belong to a pig, the Ministry of Oceans and Fisheries promised to continue the salvaging process carefully so as to not lose the remains of nine missing victims.

“We apologize for creating confusion,” said an official of the Ministry of Oceans and Fisheries. “We will ensure from now on that maritime police are stationed at the working site on the ferry.”

A maritime police officer and a forensic expert are to stay on the semi-submersible ship carrying the ferry until it reaches land, which is expected to be today or tomorrow.

The shoes found along with the bone fragments, whose number has not been announced, were determined to be “work shoes,” according to the ministry. It did not clarify whether it was that of a worker currently working on the salvaging process or a Sewol passenger nearly three years ago.

The bones were found on the deck of the semi-submersible ship at around 11:25 a.m. Tuesday. The Sewol was raised from its watery grave last Saturday almost three years since it sunk off Korea’s southwestern coast on April 16, 2014, and workers have been draining the wreck of seawater and oil.

The ferry sank with 304 lives, and the remains of nine have not been recovered. Relatives have been watching the salvaging process on a ship near the ferry or on television at the temporary shelter in Paengmok Harbor in Jindo, an island in South Jeolla.

“Some relatives went out to the waters near the ferry on the ship at the news of the remains being found, but were shocked to find out that they were actually animal bones,” said Yang Han-woong, a member of the Jogye Order of Korean Buddhism who had traveled with them to the ship.

Relatives are concerned that any remains could be lost in the process of getting the Sewol to land in Mokpo to be investigated.

“We have long worried that the remains may be lost in the process of getting the ferry ready to reach land,” said Kwon Oh-bok, whose brother and nephew died on the ferry. Their remains have not been recovered. “The search for the remains of the missing must be ongoing at all times, throughout the process of moving the ferry to the Mokpo New Port.”

The ministry announced Sunday that four actions have been taken to prevent the loss of remains during the salvaging process: 162 mesh nets have been installed on some of the ferry’s openings before it was raised from the seabed and they were all confirmed to have remained on the ferry when it was hoisted out of the water; a 3-meter (9.8-feet) high, 160-meter by 200-meter mesh-fence was installed on the seabed, around the wrecked ferry, in April 2016; a mesh net was installed between the ferry’s port side and the 33 lifting beams that were slid under the ferry’s port side to lift the ferry from the seabed; and mesh nets were installed on either side of the semi-submersible ship carrying the ferry to prevent loss of remains during the draining process.

The salvaging process, ongoing from March 22, will continue and the ferry will depart for Mokpo New Port today as planned, said the ministry.

“The ferry will leave for Mokpo New Port on Thursday after the buoyancy tanks are removed from the semi-submersible ship and the ferry is completely fastened to the ship,” said Kim Young-suk, minister of oceans and fisheries.