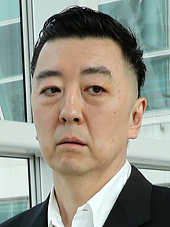 The infamous stock manipulation scandal that haunted former President Lee Myung-bak a decade ago resurfaced Wednesday as his former business partner was released from prison and vowed to go after him.

Kim Kyung-joon, a U.S. citizen, completed his eight-year prison term on Tuesday and was deported following his release.

He was indicted in November 2007 on charges of stock price manipulation and embezzlement worth 31.9 billion won ($28.6 million), and the Supreme Court finalized his conviction in May 2009. He was ordered to serve eight years and pay 10 billion won.

According to the Ministry of Justice, Kim served eight years and an additional 500 days at the prison workshop for the unpaid fine.

Kim was released from Cheonan Prison on Tuesday. He spent a day at the Justice Ministry’s shelter for foreigners in Cheongju before his departure to Los Angeles Wednesday afternoon.

During the 2007 presidential campaign, the financial scandal involving an investment fund, BBK, plagued Lee, then presidential candidate of the Grand National Party. It later became the Saenuri Party before changing its name recently to the Liberty Korea Party.

At the time, Lee, the presidential frontrunner, insisted that Kim founded BBK, while Kim said Lee was the real owner of the failed firm and the true beneficiary of the investment fraud. In December 2007, days before the presidential election, the prosecution cleared Lee of any involvement in the BBK fraud.

While the prosecution and the independent counsel concluded that Kim was the sole culprit of the massive investment frauds, Kim continued to claim Lee’s involvement. Shortly after his release from the prison on Tuesday, Kim met with Rep. Park Beom-kye of the Democratic Party and said he has conclusive evidence to prove Lee’s link to the BBK scandal.

“Kim said he will make efforts himself to lay the truth bare,” Park said. “After he returns to the United States, he plans to have media interviews.”

Kim, once deported from the country, is banned from reentry for five years. He asked Park to persuade the Justice Ministry to lift the entry ban.