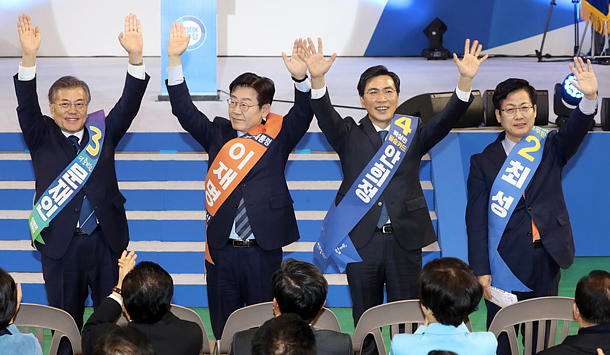 DAEJEON - Democratic Party frontrunner Moon Jae-in clinched a victory in the Daejeon primary on Wednesday, the second win in a row that has boosted his chances of winning the party nomination with an early presidential election only 41 days away.

Continuing his victory from the Gwangju primary two days earlier, Moon won 60,645 votes, or 47.8 percent of the total votes, from both Democratic Party (DP) members and those without DP membership in Daejeon and the two Chungcheong provinces that are the home turf of Moon’s rival, An Hee-jung, who has served South Chungcheong as governor since 2010.

With his two victories in a row, chances for the former DP chairman to become the party standard bearer have heightened while Governor An’s are slipping away.

Coming in second, An garnered 36.7 percent, another disappointment for the 52-year-old governor, though he managed to narrow the gap with Moon since the Gwangju primary. Seongnam Mayor Lee Jae-myung received 15.3 percent.

For this year’s four primaries, the DP is allowing non-party members to partake in the process as long as they register to vote beforehand.

The final tally was a combination of March 22 voting by both DP members and non-party members at voting booths in the Chungcheong region, a telephone survey of the two groups on Monday and Tuesday, and Wednesday voting by DP delegates at Chungmu Stadium in Daejeon. The delegates are senior members of the party.

In total vote counts from the first two primaries, Moon led the race with 55.8 percent, followed by An with 25.8 percent. Lee came in third with 17.9. Goyang Mayor Choi Sung came last with 0.3.

In his speech, Moon stressed that he would strive for a balance in national development to divert the heavy concentration of population and development from Seoul to the rest of the country, especially to Chungcheong region.

“Development for Chungcheong must not stop now. Don’t you think the heartbeat of balanced regional development should be beating again?” asked Moon to thundering cheers from his supporters. “I have a blueprint for Korea’s balanced development in which the dream of Chungcheong is embedded.”

After the vote count, An said Wednesday’s outcome was “the judgement of the people” in Chungcheong, but still sounded optimistic by noting he could still wage an upset victory, saying, “More than 60 percent of voters (who registered to vote in the primary) are in Seoul and Gyeonggi.”

He added, “I will run until the end so that the year of 2017 can be a starting point for a new politics in Korea.”

Similar to the Gwangju primary on Monday, the mood at the Daejeon stadium was also upbeat and festive amid the growing prospect that whoever wins the party nomination is likely to be elected to the highest elected office in the May 9 election.

Supporters for the three contenders, dressed in different colors depending on their favored candidate - blue for Moon, orange for Lee and Yellow for An - chanted their candidates’ names until the vote count announcement at 6:30 p.m.

With the Daejeon primary won by Moon, the DP is moving on with its third primary in the Gyeongsang region scheduled for Friday in Busan. The DP was conducting telephone surveys of both party members and non-party members on Wednesday and Thursday. After Friday’s primary, the DP will hold its final primary next Monday. The final primary is scheduled for Monday in Seoul for Gangwon and Gyeonggi provinces and Seoul. If none of the DP’s three main contenders wins a majority in the April 3 primary, the DP will move on to a run-off election in which the top two candidates compete.

The run-off election is scheduled for April 8. The venue has yet to be decided.