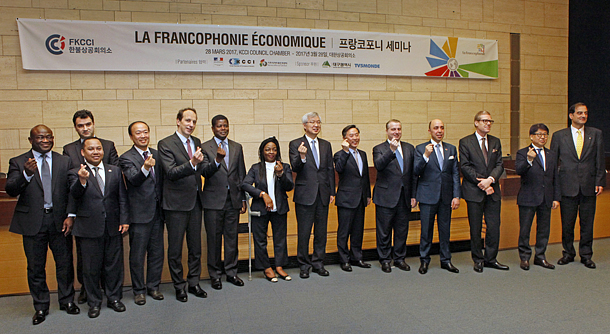 Diplomats representing French-speaking countries, including French Ambassador Fabien Penone, fourth from left, and Senegalese Ambassador Mamadou Ndiaye, sixth from left, pose together with Lee Tae-ho, deputy minister for economic affairs at the Ministry of Foreign Affairs, and David-Pierre Jalicon, chairman of the French Korean Chamber of Commerce and Industry (FKCCI) at the La Francophonie Economique seminar hosted on Tuesday at the Korea Chamber of Commerce and Industry by the FKCCI to strengthen relationships between Korean and Francophone institutions. [PARK SANG-MOON]