Sewol walls were made of cloth, notes pilot’s letter

Sewol walls were made of cloth, notes pilot’s letter 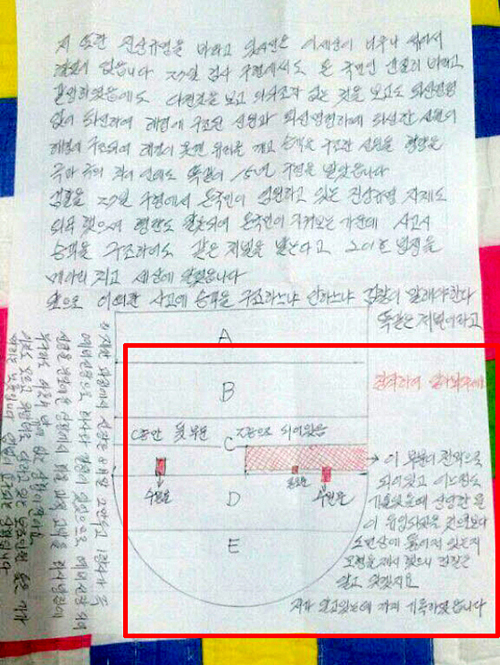 The pilot of the Sewol ferry, which sank on April 16, 2014, wrote a letter to a pastor seven months after the tragedy in which he detailed how the water must have flooded the vessel very quickly because a part of an extension of the hull above the waterline was not made out of steel but plastic or fabric.

“[The wall] in this area was made out of tent material, and when the ferry was tilted to one side, a lot of water must have flooded in through this area,” the helmsman, or pilot, Oh Yeong-seok, wrote in his letter. “I apologize to the relatives of the dead and I promise to live my life with a penitent heart.”

Oh was sentenced to two years for violation of the Rescue and Aid at Sea and in the River Act by the Supreme Court in November 2015, but died of lung cancer in April 2016.

The letter was addressed to pastor Jang Heon-kwon, who was head of the Gwangju branch office of the National Council of Churches in Korea from 2014 to 2015, and who has been regularly attending the trials of crew members and the captain of the Sewol.

Jang received the letter in November 2014, but the letter was revealed to the public for the first time via the exclusive report of Focus News on Monday.

“At the time, I didn’t think the letter was of value to investigations into the incident,” Jang told the Korea JoongAng Daily. “I recently met a reporter at a memorial site for the Sewol victims and handed over the letter then.”

The special investigation committee of the Sewol’s sinking at the National Assembly pointed out in a hearing last year that the sea water must have flooded the ship very quickly through an opening with a height likely sized equal to the height of an elementary school student, and that this may have led to its rapid capsizing.

The ferry capsized within 101 minutes of tilting to its port side.

A sketch of a diagram was included in the letter to indicate which parts of the ship were made out of fabric.

“I added a diagram of the ferry so investigators can refer to it when they figure out why the sea water flooded the ship so quickly, aside from why the ship tilted initially,” wrote Oh in the letter.

The prosecution had also written in its report in October 2014 that the heavy cargo was not properly tied in place and had shifted around, worsening the tilt, and the ferry could not recover its balance due to sea water flooding the vessel.

The Sewol ferry sank on April 16, 2014, off Jindo, an island in South Jeolla. Of the 476 people on board, 304, mostly students on a field trip from Danwon High School in Ansan, Gyeonggi, died. The remains of nine passengers have yet to be recovered.

Criminal cases against those involved in the tragedy have almost concluded. Captain Lee Jun-seok was convicted of deserting the Sewol as it sank.