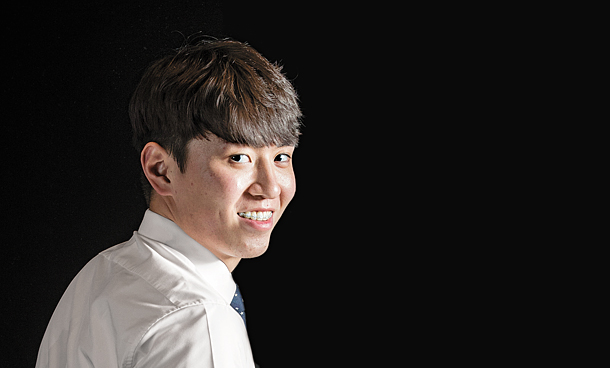 Basketball fans in the Korean Basketball League (KBL) showed great interest in its rookies prior to the 2016-17 regular season because many “super-rookies” made their debuts. Of the many rookies, Lee Jong-hyun of Ulsan Mobis Phoebus, Choi Joon-young of Seoul SK Knights and Kang Sang-Jae of Incheon ET Land Elephants were called the “top three.” And as Kang expected, the three were ranked first to third in rookie standing respectively at the end of the season.

Many expected a close match between Kang and Choi for the Rookie of the Year award, but surprisingly, Kang received 96 out 101 votes. When their season average records are compared, Choi is slightly ahead of Kang with 8.2 points and 7.2 rebounds.

Kang always called himself “runner-up.” He was the main player in high school but because his school wasn’t big in basketball, Kang did not receive much attention. When he played for Korea University, he was part of the winning team every year, but was always covered by Lee, who received all the attention.

“I roomed with Jong-hyun all throughout college and it helped me improve my skills,” Kang said. “But in a game where I led the team to a win, it was still Jong-hyun who received attention. I was hurt by that multiple times.” 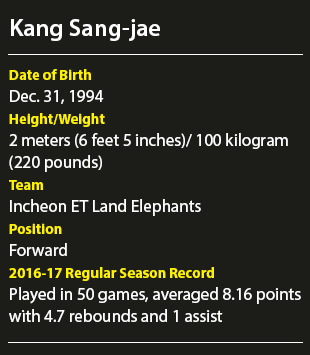 Competition for the Rookie of the Year award was very intense this season. Lee, who was most likely to win, was not even eligible to be considered as a recipient due to delay in his debut from an ankle injury.

“I felt like I was blocked by a big wall,” Kang said. “It was hard to adapt to Elephants’ fast basketball and I was overwhelmed by being called as the top three.”

In the beginning of the season, Kang lost 12 kilograms (26 pounds) and restored his confidence after he learned to adapt to the team’s tactics. Advice he received from veteran players like Jung Young-sam and Park Chan-hee helped take some pressure off of his shoulders, as well. With that, starting in the fourth round, Kang had more games scoring double-digits points, and by the end of the season, he gained tremendous confidence.

Kang is a stretch four, a player who plays in the power forward position, which is not very common in Korea.

“Practicing corner shots with my dad helped a lot,” Kang said. “And growing about 10 centimeters (4 inches) every year allowed me to experience different positions like point guard and center.”

Upon completion of this season, Yoo Do-hoon, manager of the Elephants, is planning on having a personal coach for Kang.

When Kang was little, an interview he watched of Seo Jang-hoon left a strong impact on him.

“In the interview, he mentions how his dream was to become the best player that no one ever was,” Kang said. “Just like him, I also want to be remembered as another exceptional player.”

The Elephants begin their playoff game against the Seoul Samsung Thunders today. Many experts predicted the Thunders’ predominance based on the two team’s head-to-head record of five wins and one loss in the regular season.

“The Thunders are a strong opponent but in the latest game, we won 81-78,” Kang said. “We won’t be an easy team to win against.”