A fireworks finish for the Lotte World Tower

A fireworks finish for the Lotte World Tower 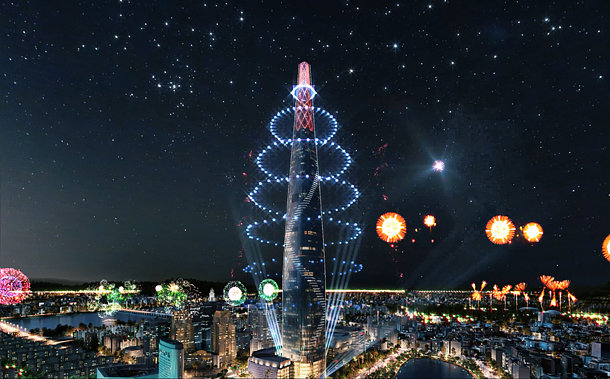 A computer-generated image of the fireworks show to take place on Sunday at Lotte World Tower in southern Seoul. [LOTTE CORPORATION]

Lotte is celebrating completion of its landmark World Tower in the Jamsil area of southern Seoul with a fireworks display on Sunday.

The spectacle will start at 9 p.m. and last 11 minutes, which the company claims is longer than the famed New Year’s Day fireworks shows at Taiwan’s Taipei 101 and Dubai’s Burj Khalifa. A total of 30,000 firework tubes will be used for the show, and the amount of gunpowder inside will weigh more than 4 tons.

Groupe F, a French designer of pyrotechnic displays, took charge of designing the fireworks show and installing the equipment. The company is well regarded in the industry, having participated in designing the Taipei and Dubai shows, as well as events at the Eiffel Tower in Paris. Groupe F will finish installing pyrotechnic devices outside the World Tower’s walls today after working on it for two weeks.

In tandem with the show, Lotte has organized a host of cultural events from 7:30 p.m. to 9:30 p.m., including performances by singers DJ Doc and Hong Jin-young.

At nearby Seokchon Lake, which is part of the Lotte World complex, an installation by Dutch artist Florentijn Hofman of “Rubber Duck” fame will be up starting on Saturday. The piece, “Sweet Swans,” features a family of rubber swans between 3.5 and 16 meters (11.5 to 52.5 feet) tall.

Around 10,000 seats will be set up near Seokchon Lake for those who want to watch the show up close. But for those who can’t, the company says the fireworks will be visible from outside the Jamsil area, too. Lotte World Tower’s Facebook page includes a list of places where the display will be visible. They include the square in front of Olympic Park’s World Peace Gate, the Jamsil Han River Park, Ttukseom Resort and the terrace at Kangbyeon Technomart’s 9th floor. And for those who can’t enjoy it in person, Lotte will stream the fireworks show live on Facebook.

To ensure visitors’ safety, the roads between Lotte World Tower, Lotte World Mall, the Songpa District Office and Seokchon Lake will be closed to traffic. The city will increase subway service on Sunday to accommodate crowds, though details have not yet been announced.

“The company is making every effort possible to ensure the show and festival runs without safety issues” Lotte Corporation CEO Park Hyun-chul said.

Aside from police and firemen, around 1,000 security guards and 500 volunteers will be on hand between 5 and 10 p.m. on Sunday to provide ancillary support.