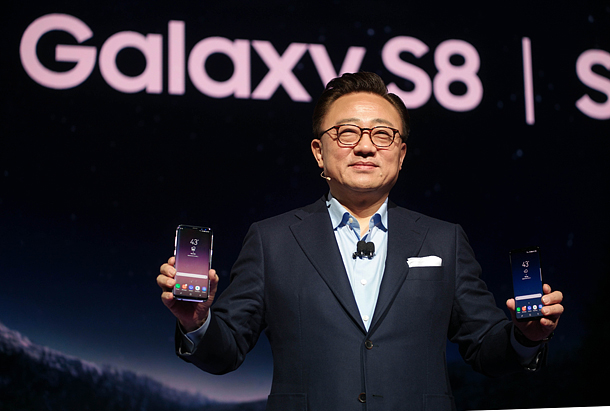 Koh Dong-jin, president of the Mobile Communications Business at Samsung Electronics, demonstrates the Galaxy S8 and S8+ at a launch event in New York Wednesday. [YONHAP]

Samsung Electronics on Wednesday unveiled the eagerly-awaited Galaxy S8, which is jam-packed with new features from facial recognition to an artificial intelligence assistant named Bixby, whose Korean and English are top notch.

The debut of the flagship S8 and its super-sized cousin S8+ comes almost eight months after the Korean tech giant released the explosion-prone Note7, which underwent a massive recall and was ultimately discontinued in December. Samsung delayed the S8 launch date by a month to make sure the devices had no hardware or software glitches. 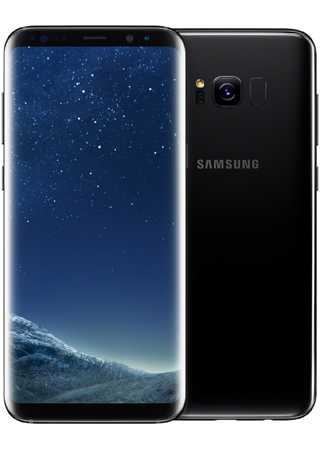 The S8 will determine whether Samsung can regain damaged customer confidence, rehabilitate its brand’s image and cement its standing as the world’s No. 1 smartphone vendor.

“The Samsung Galaxy S8 and S8+ usher in a new era of smartphone design and fantastic new services, opening up new ways to experience the world,” said Koh Dong-jin, president of Mobile Communications Business at Samsung Electronics, at an event in New York Wednesday. “The Galaxy S8 and S8+ are our testament to regaining your trust by redefining what’s possible in safety and mark a new milestone in Samsung’s smartphone legacy.”

To realize what has been dubbed “infinity display,” a patented name that suggests the effect of infinity pools, Samsung has ditched the physical home button and hidden a pressure-sensitive button beneath the screen.

The S8 has a 5.8-inch display measured diagonally, 0.1 inch larger than the disgraced Note7, while its bigger cousin boasts the largest display for any smartphone from Samsung, 6.2 inches. That is 0.7 inches bigger than rival iPhone 7 Plus.

The devices have an 18.5:9 aspect ratio, which Samsung explains has been devised to support both 19:6, an international standard for DVDs, and 21:9, a near-cinematic movie ratio. 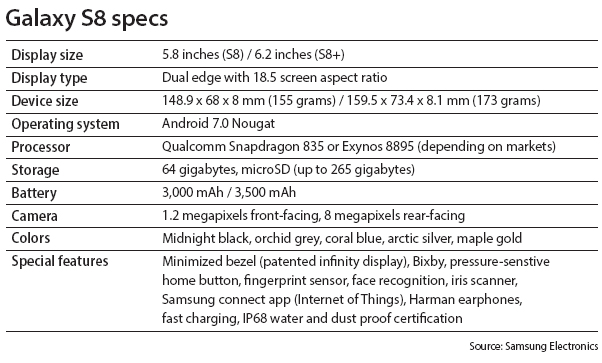 You only have to look at the 8-megapixel front-facing camera - just like taking a selfie - for the device to be unlocked. The feature doesn’t work with closed eyes, so nobody can access your phone by taking a picture of you sleeping.

Koh said the iris sensor, which is much more secure than fingerprint scanning and facial recognition, will be used to verity identities for Samsung Pass, a payment service.

The new phones come with a virtual assistant named Bixby, an upgrade to Samsung’s S Voice system designed to compete with Apple’s Siri and Google’s Assistant. Bixby is the first creation of a team of researchers at Viv Labs, a California-based start-up run by the co-creator of Siri that Samsung acquired last October.

The AI secretary can be activated either by voice or by pressing a button on the left edge. It can recognize voices and images shown through the camera.

“As the Bixby ecosystem grows, it will connect across devices, apps and services as a ubiquitous interface, and open up new experiences and scenarios to simplify life,” Samsung said in a statement.

The battery capacity for the S8 has been lowered to 3,000 mAh from the 3,500 mAh in the similar-sized Note7. That is meant to prioritize safety, after Samsung identified batteries as the cause of the phablet’s meltdowns.

“The S8 is the start of a ‘super cycle’ for smartphone innovation in 2017,” said Wayne Lam, a director at market researcher IHS Markit, in a report. “This year, there will be very significant advances in the design and performance of smartphone models after several years of incremental improvement.”

Samsung is also releasing the Samsung DeX, a dock that hooks your mobile device up to a monitor, keyboard and mouse and turns it into a desktop computer. It runs on a desktop version of Android or a virtual Windows 10 solution. Users can easily display and edit data from their phone.

The device is likely to sell for 150 euros ($161) in Europe but the price hasn’t been decided for Korea. Samsung said it is considering selling the S8 and DeX in a package deal.

The new phones will begin shipping on April 21 in Korea, the United States and Canada, and will reach Southeast Asian and European countries gradually. By the end of this year, the devices will sell in 120 countries, including China, Koh said, vowing to revitalize Samsung’s heavily degraded standing in that crucial market, which is currently dominated by local brands such as Huawei and Oppo.

Samsung was the sixth-largest smartphone vendor in China in the October-December period last year, according to Strategy Analytics, nose-diving from being the top player in the first quarter of 2014.

Preorders in the first batch of countries will be taken from April 7 through April 17 and phone stores as well as Samsung’s digital plazas will start showcasing the phones on April 1.

The prices are not available yet, but Koh told reporters that the Plus model won’t exceed 1 million won ($895), denying widespread speculation that the S8 will carry heftier price tag - due to ample new features - than preceding models. The Note7 started at 9,889,000 won in Korea.

“There is psychological resistance [among consumers] against 1 million won,” he said. “We are still in the middle of discussion.”

Industry sources say Samsung has set a goal of an initial supply of 12.5 million units for the S8 phones, which compares to 10 million units of S7s sold in the first 20 days. Some upbeat forecasts from brokerage houses say the S8 may see more than 43 million sales by the end of this year. Shares of Samsung ended 0.48 percent higher at 2,099,000 won on Thursday.

Apple on March 25 unleashed limited-edition red iPhone 7s and iPhone 7 Pluses, an apparent move to steal some thunder from Samsung. Apple said every purchase contributes to a global fund to support HIV/AIDS programs. The two models - in 129 gigabytes and 256 gigabytes storage models - became available in both Korea and the United States. Their prices start at 999,000 won.