Park spends hours in court arguing against going to jail

Park spends hours in court arguing against going to jail 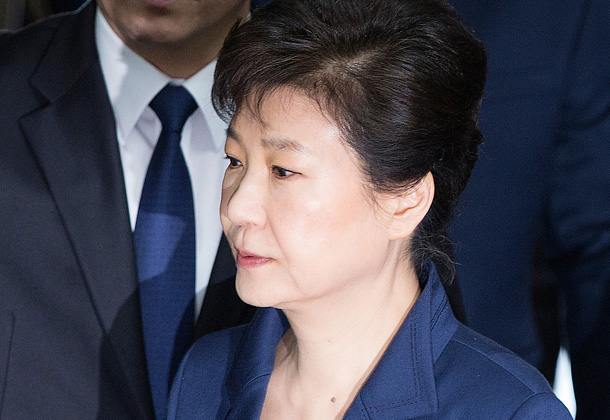 The Seoul Central District Court started a hearing in the morning on a request for a warrant to detain the former president for investigation and probably indictment. Park is Korea’s first leader to be impeached and removed from office and the first former president to be subjected to such a warrant hearing.

No reporters were allowed in the hearing.

After the hearing, Park was brought to an investigation room at the Seoul Central District Prosecutors’ Office to await a ruling.

Park was impeached in December by the National Assembly for allowing her inner circle to secretly influence state affairs for their private gain. The Constitutional Court terminated her presidency on March 10, lifting the presidential immunity that shielded her from criminal prosecution. After subjecting her to 22 hours of questioning on March 21, prosecutors applied Monday for a warrant to take Park into custody to investigate and prosecute her.

Park is currently facing 13 charges, including bribery, abuse of power and leaking of confidential documents.

If the court issues a warrant, Park will be taken immediately into custody and sent to a detention center. The prosecution will have up to 20 days to question her under detention before indictment.

When a suspect is detained before indictment, they are almost always detained after indictment and through the trial.

If the court rejects the warrant request, Park will be released immediately. She will be prosecuted and undergo trial without being detained.

A typical warrant hearing starts with the prosecution’s presentation of each charge on its warrant application and argument as to why pretrial detention is necessary.

A suspect will make rebuttals assisted by lawyers. The judge can also question the suspect.

During questioning on March 21, prosecutors used the title “Madam President” to address Park. But the court said she will be addressed as the “suspect” in the courtroom.

Before the hearing began, one of Park’s lawyers warned of a long, fierce battle. “We will, of course, argue for her innocence,” he told the JoongAng Ilbo. “And it will at least take 12 hours to prove it.

“The prosecution used 13 charges against her,” he said. “If we spend 40 minutes for each charge, it will take 12 hours, including recesses.”

Park’s lawyers have a history of a long argument.

In her impeachment trial before the Constitutional Court, 15 lawyers took turns to give a five-hour closing argument on Feb. 27.

Until Thursday, the longest warrant hearing on record was on Feb. 16 for Samsung Electronics Vice Chairman Lee Jae-yong, who is accused of offering bribes to Park through her longtime friend Choi Soon-sil.

The hearing on independent counsel Park Young-soo’s second request for pretrial detention of Lee took seven hours and 30 minutes. The court issued a warrant at 5:30 a.m. the next day.

Yesterday, the prosecution sent six elite prosecutors: senior prosecutors Han Woong-jae and Lee One-seok, who questioned Park earlier this month, and four more from the special investigation team. They were to argue that Park’s detention was necessary to prevent the destruction of evidence. They were also to argue that it is only fair to detain Park, a primary suspect in the scandal, because others involved, including Lee and Choi, are detained.

Park was accompanied by Yoo Yeong-ha, who has defended her since the prosecution launched its initial probe at the end of last year, and Chae Myung-sung, one of her lawyers at the impeachment trial.

Judge Kang will review a 120,000-page investigation report from the prosecution and a statement from Park’s lawyers in addition to her responses during the warrant hearing before making a ruling. The records he has to consider are about 10 times more than those submitted by the independent counsel last month when it sought a detention warrant for Samsung’s Lee.

The ruling is expected to come Friday morning at the earliest.

Earlier in the morning, Park was visited by her long estranged younger brother, Park Chi-man, and his wife, at her residence in Samseong-dong, southern Seoul. Seven lawmakers from the Liberty Korea Party, including Reps. Choi Kyung-hwan, Yoon Sang-hyun and Cho Won-jin, also came.

She headed to the court around 10:09 a.m. “When Park was leaving, tears were seen in the eyes of her brother and his wife. Park’s eyes were also wet,” one of the lawmakers told the Yonhap News Agency.

Park used a black sedan provided by the Presidential Security Service. She still receives security from the Blue House as a former president.

About 600 supporters gathered outside her home and shouted her name. Some wailed loudly and some waved the national flags. As the car moved through the neighborhood, some tried to approach the car and scuffled with the police.

She arrived at the Seoul Central District Court around 10:20 a.m. and entered the building without answering any questions from the press. Escorted by bodyguards, she used a stairway to reach the courtroom on the third floor.

Some supporters moved to the court and started a rally. The police deployed 1,920 officers to the court and the prosecution compound. A rival rally was also held near the area to urge the court to arrest Park.

An organizer of the candlelight vigils that called for Park to resign also held a press conference.

“Bribery is a felony punishable by lifetime imprisonment,” said Kwon Yeong-guk, a lawyer and a legal counsel of the group. “There is no need for us to even discuss the seriousness of her crime. Even after dismissal, she stayed in the Blue House and there is a high possibility of evidence destruction.”