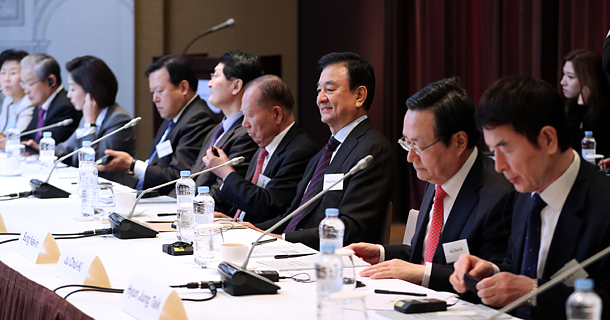 Members of clubs Korea-France and France-Coree, including Hong Seok-hyun, president of the Club Korea-France and former chairman of the JoongAng Ilbo and JTBC, third from right, discuss bilateral cooperation between France and Korea on business, culture and innovation to counter the influx of protective policies set forward by China and the United States at the Grand Hyatt Seoul in central Seoul on Thursday. [KIM SEONG-RYONG]

France and Korea can do much more together, senior business, legal and media professionals agreed in a meeting on Thursday.

“A new type of international order is being established as we speak today, and our meeting is very well-timed in that both countries will be holding elections in the near future,” said Louis Gallois, president of the Club France-Coree, based in Paris.

“In marking 130 years of bilateral ties last year, there were 250 events in 40 cities here that 5 million Koreans took part in. This dynamic will continue into 2017 and it will be the responsibilities of the Club Korea-France and Club France-Coree to see it through.”

“The discussions today will prove worthy for leaders of both countries to share perspectives on how they read the China-U.S. relations since the advent of the Trump administration,” said Hong Seok-hyun, president of the Club Korea-France and former chairman of the JoongAng Ilbo and JTBC.

“The discussions are timely because the upcoming presidential election in France is gaining global attention for its significance to Europe. While it is quite unlikely that France, too, will succumb to the whirlwind of populism sweeping the world, the examples of Brexit and the election in the United States nevertheless have many worried.”

The consensus among the members gathered at the Grand Hyatt Seoul on Thursday was that there are many areas for France and Korea to bridge new economic and trade ties.

“Korea and France have been cooperating on sovereign wealth funds since last year, and we have already reached two big investment agreements,” said Laurent Vigier, chairman and CEO of the CDC International Capital in Paris. “The two countries have also been cooperating on medicinal development and on French Tech [French start-ups in France and abroad].”

Vigier added, “I believe the two can also cooperate on sustainable energy and smart cities, because both countries lack natural resources and have to create different sources of energy. Bilateral cooperation on silver health may also prove useful for both, as France has long been an expert in this field.”

“There are ample business opportunities for the two countries to work on together,” said Hyun Jung-taik, president of the Korea Institute for International Economic Policy. “We should discuss increasing Korean investments into France, bilateral cooperation on IT, financial services and on entering the market in Africa, and forging ties on new technological development in the age of the fourth industrial revolution.”

The French Korean Chamber of Commerce and Industry (FKCCI) had held a conference on Tuesday inviting Francophone and Korean business leaders to cooperate in entering the African market.

“In the face of superpowers who are trying to dictate the global market to their tastes, business leaders and companies must start thinking differently. Those who were competitors yesterday are now partners,” said David-Pierre Jalicon, chairman of the FKCCI.

“Korea and France must lead efforts to create a multilateral platform to enter the market in Africa or Southeast Asia together. We will be in effect creating a platform that is not reliant on superpowers.”

“Instead of focusing on a specific country or superpower, France and Korea will have to use each other as a platform into a region,” said Philippe Li, lawyer at law firm Kim & Jang.

“For France, Korea is a platform into Asia, and for Korea, France is a reliable partner in the European Union after the Brexit.”

Some business leaders encouraged sharing of information and experiences in dealing with protective economic policies of China.

“The economic retaliations from China due to the Seoul-Washington decision to deploy the U.S.-led Terminal High Altitude Area Defense [Thaad] antimissile system are inflicting direct impacts on us,” said Hwang Kag-gyu, president of policy coordination at Lotte Group.

“I know that Carrefour of France had difficulties in branching out its business into China after the whole Dalai Lama deal. It would be helpful to learn more about how France dealt with the economic retaliations at the time.”

According to Lotte, 67 of its stores in China have been placed under suspension as of last week. Additionally, some 20 more outlets decided to voluntarily shut as aggressive Chinese consumers staged anti-Korea protests near the stores, it said.

It is predicted Lotte will suffer 116.1 billion ($103.9 million) in losses if the shutdown continues for a month.

But policy experts pointed out that it is also important for leaders of France and Korea to step back and realize not all protective policies set out by the Trump administration are going to run.

“Notice that the Trump administration’s attempt to ban immigration from seven Muslim-majority countries was blocked by the judicial branch,” said Jean-Daniel Tordjman, secretary general of the Club France-Coree. “I do not think Trump’s campaign pledge of building a wall on the border with Mexico, which will cost some $20 billion, will come true, either.”

He added, “You see, there is a limit to how much the Trump administration can do. The important question to ask is where the world is going with all this. Trump was elected in a time of instability throughout the world, in terms of economics and security. What’s at stake is the attacks on the institution of multilateralism.”

“Note that the trade war is not only between certain countries, but that it is having a clear effect on all global powers,” said Stephane Israel, CEO of Arianespace. “The key for both France and Korea in safeguarding the institution of free trade would be in helping the people of both countries realize that they can be the winners of free trade.”

Business leaders and policy experts discussed population policies of France that successfully boosted the birthrate of the country. Korea’s fertility rate, 1.17, is the lowest among OECD members.

“France had also struggled with a low fertility rate until 1990s, but it was able to pull the rate up to 2.1 last year, jumping above many European countries,” Hong said. “The discussions today will help many policy experts learn from the French success.”

“For family-focused policies to be effective here, the working environments and mindsets of the people need to change, because many working parents are pressured from taking time off work to focus on family matters,” said the Liberty Korea Party Rep. Na Kyung-won, who is a member of the National Assembly committee on low birthrate and aging population. “No matter how much legislation is passed, it would be of no use if working mothers and fathers cannot benefit from them.”

The forum between the members of clubs Korea-France and France-Coree hosted on Thursday was the third one since March 2016, when the first forum was held in Seoul in commemoration of the 130th anniversary of France-Korea diplomatic ties.

The clubs Korea-France and France-Coree met again in June 2016 in Paris to host the second forum, at which point 32 suggestions for bilateral cooperation in politics, diplomacy, security, economics, trade, education, science and culture were drafted and submitted to the presidents of Korea and France. The two clubs house some 30 members.