What the candidates forgot

What the candidates forgot 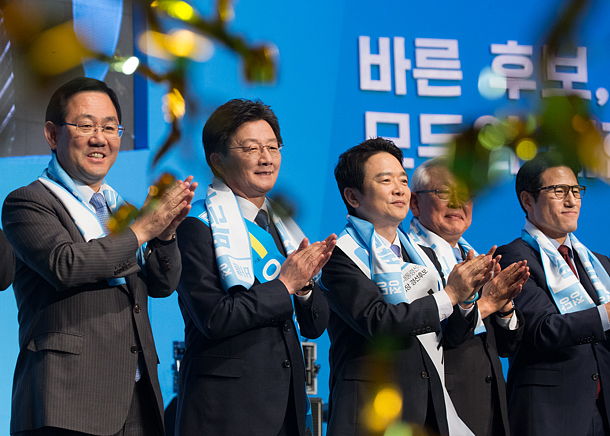 After winning a primary for the Bareun Party’s nomination on Tuesday, Rep. Yoo Seong-min, second from left, applauds with other candidates. [JOONGANG PHOTO]

The presidential race is taking shape and the political arena is heating up, but it still seems premature for the passion to be spreading widely among the public. It’s not because the public is in a habit of seeing things with a negative view. It is probably because the distance between establishment politics and the people’s politics, the two pillars of democracy, is growing wider.

The sense of separation between the presidential candidates and the people who managed to bring about an early presidential election through their protests is particularly serious in two places.

First, the voters are clearly excluded from a discussion about an electoral alliance between the two conservative parties. Second, rosy pledges are presented by high-profile candidates one after another, but they are showing a lukewarm response to fierce demand from the public to renew the country’s outdated democracy.

Although there are differences in the specifics of each party, not only party members but also supporters and the general public participated in each party’s nomination process for its standard bearer. The deals created during the process, though, between the candidates and the public have flip-flopped frequently.

First, the people who supported Yoo Seong-min of the splinter conservative Bareun Party, who was lauded for his determination during the impeachment process of President Park Geun-hye and his values of “compassionate conservatism,” are once again facing the “politics of betrayal.” There are looming rumors that he may form a conservative coalition with the Liberty Korea Party, the party from which he broke off. Of course, political scientists say coalitions among candidates are “pragmatic decisions” under the country’s winner-take-all election system.

But there are two kinds of electoral alliances. One is a coalition only aimed at winning the election, and the other is a coalition of shared values. The Bareun Party, which voluntarily walked the rocky road of a new political party to serve the public, is now discussing a candidate consolidation with the Liberty Korea Party only a few months after their separation. In this discussion, there is no respect for values. The Liberty Korea Party is the home of obsolete developmentalism and nationalism, and an electoral alliance means a regression of history in which the new conservatives will become the old conservatives once again.

At the end of the day, voters will attack the coalition only for the victory. After Yoo hinted at the possibility of a conservative coalition, his support rate plummeted. Although Yoo is trying to turn around the situation, such a coalition lacking the consensus of supporters and the public is destined to bring about a radical loss for him. An electoral alliance that ignores ideology and values is nothing more than a shaky sand castle. Even if he wins, it will be a house of cards.

The people are feeling more distance from the political establishment over the candidates’ campaign pledges. They promise jobs, shorter work hours and even a sabbatical system for all people, but they are making no progress in presenting their pledges to establish a presidential system that is capable of responding and communicating with the public, a fundamental demand that led to the early election in the first place. There is almost no discussion of how to restructure the massive, imperial organization of the Blue House. The secretariat and Presidential Security Service have staff numbers far larger than the total number of public servants in the Ministry of Gender Equality and Family and the Ministry of Unification.

There have also been no new promises by the candidates on how to better communicate with the media, the eyes and ears of the people.

The powerful driving force of people-centered politics, which started with protests to remove President Park and then brought about the National Assembly’s impeachment and Constitutional Court’s ruling, was never intended to demand policies of unreasonable benefits.

The ordinary citizens know better than anyone that there is no magic pill to resolve poverty among the elderly and youth unemployment at once. Their hard, agonizing life experiences tell them that.

They also know that we won’t be able to catch up with the so-called fourth industrial revolution led by the United States in one step. The people never expected unrealistic, sugarcoated promises. Instead, the key demand was a government that deals with the issues of everyday lives with the same perspective as the people. Their main demand is a president who communicates.

The candidates have probably forgotten for whom and why the early election is taking place amid their hectic schedules, heated party conventions and fierce loyalty contests among their advisers. When the candidates spend a minute every day calmly recalling the roots of the upcoming election, their distance to the people will be reduced and the meaning of this historic election will be clear.

*The author is a political science professor at Chung-Ang University and columnist for the JoongAng Ilbo.