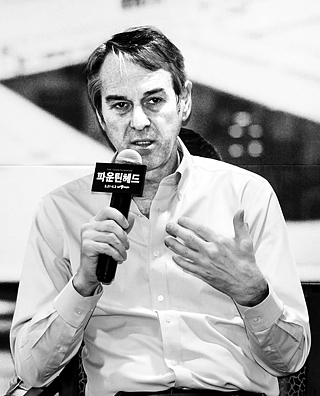 That was one of the concerns of renowned Belgian theater director Ivo Van Hove, who is known for his radically stripped down interpretations of works. It was the reason he decided to adapt the 1943 novel “The Fountainhead” by Ayn Rand for the theater.

“One of my assistants on another production gave me the book in 2007, and he had inscribed on the front page, ‘Ivo, this is for you and you have to read this now,’” said Van Hove, who was in Seoul for the first time to introduce his production of “The Fountainhead” to Korean audiences. Van Hove’s theater company Toneelgroep Amsterdam is currently presenting three performances of it at the LG Arts Center until Sunday.

“This book talks about two architects, Howard Roark, who is an idealist, and Peter Keating, an opportunist who compromises for his clients,” he said.

“For me, this was the central issue for every artist. It confronts us with a sharp contrast. You are presented with a choice of whether to be a part of the community or just to totally be yourself. It’s a real dilemma because an artist is also a part of society. But as an artist, you should totally be able to express yourself.” 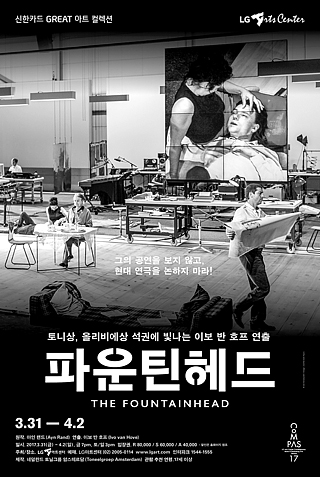 According to Van Hove, Ayn Rand was abundantly clear about what side she was on. In his production, he says he didn’t want to take such an ironclad position. Instead, he makes it a choice the audience to make on their own.

The topic may sound heavy, but Van Hove says theater is not supposed to be pure entertainment.

“It should be entertaining, but it all goes back to what the Greeks were doing. Thousands of years ago in the Greek theater, people came to see plays because heavy and serious issues were discussed - issues of war, subversive behaviors, family problems, responsibility or irresponsibility towards society and so on. All these issues were presented. Of course it was entertaining, but the goal was not entertainment.

“I believe this story can make people think about important things,” he added. “For me, this is the theater of ideas. It’s like idea on stage, [presenting] things to think about and really think about.”

Van Hove says it was challenging “theatrically, to bring this novel onto the stage as you have to present the world of architects.” To better present it to the audience, he decided to use cameras for his production. Using a projection screen, he shows images of Howard Roark, played by Ramsey Nasr, sketching buildings, for example. 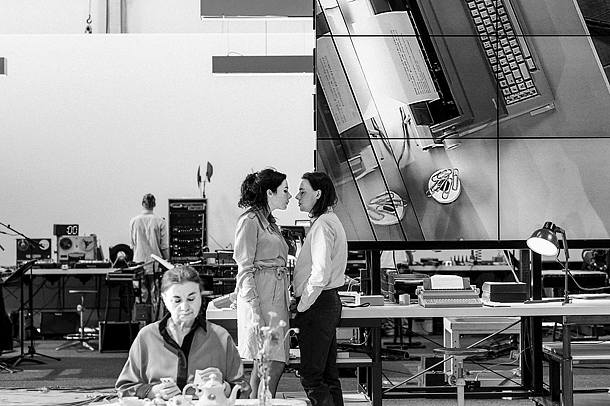 Ivo Van Hove says he concentrated on romantic angles in the plot because love is “something inexplicable as ancient history.” [LG ARTS CENTER]

“The camera gives me the possibility of being very intimate with the actors. I can show extreme details that you can never see in the auditorium.”

To turn a 750-page book into a four-hour play required the excision of numerous scenes. Van Hove focused on the romantic side of the story as he believes loves is “something inexplicable as ancient history.”

That’s why the next production that he will work on is purely about love.

“It’s called ‘Obsession,’ and we will have the actor Jude Law playing the protagonist,” he said. “He meets a woman and they never talk to each other, but fall in love. I think without love, life is not possible.”