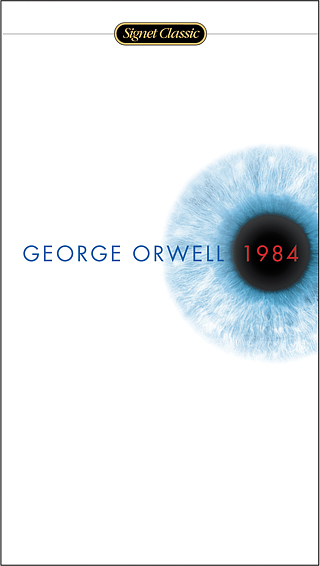 This cover image released by Signet shows the latest cover image for George Orwell’s “1984.” Movie theaters nationwide are programming with politics in mind. On Tuesday, nearly 200 art-house cinemas will screen “1984,” the movie, based on Orwell’s book. [AP/YONHAP]

NEW YORK - On Tuesday, it will be “1984” again in movie theaters across the country.

About 190 art-house theaters have banded together to show the 1984 big-screen adaptation of George Orwell’s dystopian masterpiece as a pointed comment on the presidency of Donald Trump, whose “alternative facts” administration has already sent “1984” back up the bestseller lists .

“It’s what’s in the air. People want to do something,” says Dylan Skolnick, an organizer of the event and co-director of the Cinema Arts Centre in Huntington, New York. “This started with a conversation about: ‘We need to do something. Well, what do we do? We show movies.’ So the obvious answer was: We should show a movie.”

Cinemas around the country are increasingly programming with political protest in mind, playing movies that have newfound resonance for those who disagree with the policies of the Republican president. In May, some 60 theaters are planning to screen films from the predominantly Muslim nations targeted by Trump’s proposed travel ban. That initiative has been dubbed the Seventh Art Stand and billed as “an act of cinematic solidarity against Islamophobia.”

Cinemas, particularly independent ones, are places to gather and connect, and they are finding under Trump a renewed sense of mission that goes beyond the usual arguments for the big-screen experience over streaming.

“To really genuinely connect with other people - which seems to be a consistent theme our country is struggling with - it’s all about being in a corporeal public sphere together, and doing that in and around art,” says Courtney Sheehan, executive director of Seattle’s Northwest Film Forum and an organizer of the Seventh Art Stand. “We’re not just an ancillary component of social change conversation. This is ground zero for action.”

A Trump effect has already been partially seen in the recent box-office success of Jordan Peele’s horror hit “Get Out” and Raoul Peck’s James Baldwin documentary “I Am Not Your Negro” - movies that offer straight talk on racial issues that might be lacking in Washington. On the small screen, Turner Classic Movies more cheekily programmed Elia Kazan’s “A Face in the Crowd,” with Andy Griffith as a populist radio personality who rises to political demagogue, to air on Inauguration Day.

“1984,” the second movie version starring John Hurt and Richard Burton, will play in 175 cities and 44 states, as well as a few internationally in Canada, England and Sweden.

The event has been organized under the name United States of Cinema; its website lists the participating theaters. April 4th was selected because that’s when Orwell’s Winston Smith begins his forbidden diary as a rebellion against his oppressive government.

A similar motivation fueled Richard Abramowitz, founder and president of the indie film distributor Abramorama. He and Sheehan began discussing organizing something at the Sundance Film Festival in January and their plan has attracted the support of Steve Buscemi, Jonathan Demme, Woody Harrelson and more. Other companies have joined, as well; the online video hub Vimeo will show shorts focused on refugee stories.

Since first announcing the Seventh Art Stand two weeks ago, Sheehan says participating theaters have doubled from 30 to about 60. The most, she says, are in Indiana.

Theaters have a long list of films from which to choose from Iran, Syria, Sudan, Yemen, Libya and Somalia. Most notable is Iranian filmmaker Asghar Farhadi’s Oscar-winning “The Salesman.” AP