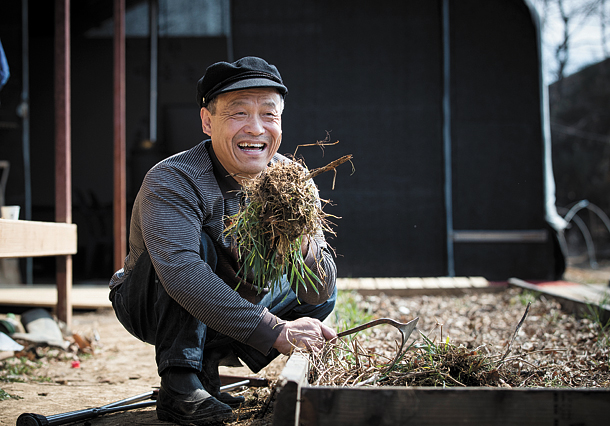 Ahn Cheol-hwan, an urban farmer, smells the soil from his own farm. He says the smell is the bracing smell of life. [KWON HYUK-JAE]

Ahn Cheol-hwan, 55, an urban farming pioneer and a chairman of the Onsunhawn Association, runs a farmer training school at the foot of Mount Gwanak in Gwacheon, Gyeonggi, for people who dream of urban agriculture. “After practicing, people will either farm in the city or return to a rural area,” Ahn said.

Ahn was born and raised in Seoul and worked as a publishing designer until the financial crisis in 1998. After leaving the company, he found a weekend farm at Mount Suri in Gunpo, Gyeonggi, and became interested in agriculture.

Q. Why are the numbers of urban farmers growing and why have weekend farms become popular?

A. The population of urban farmers is growing rapidly, from 1.5 million in 2014 to 2 million in 2017. In 2015, there were 74 ordinances to foster urban agriculture and there will be more now.

What does the association name “Onsunhawn” mean?

What is low-investment farming?

I call it hoe farming. Just with one hoe, anyone can farm, it is the traditional way. In Jecheon, North Chungcheong, I saw an old lady cultivating a 3,300-square-meter farm just with a single hoe.

I had polio when I was a baby, and became handicapped, so I need crutches and a wheelchair. However, disability is not an obstacle to farming. I crawled on the farm and made a special handcart for my tasks. It was difficult, but also enjoyable. Now I am a professional farmer.

How did you learn to farm?

When I was in the publishing industry, I got to know an organization that helps urban dwellers return to farming and published its quarterly. During the four years in which I worked with that organization, I interviewed many professional organic farmers across the nation and learned farming skills from them.

How did you become an urban farmer?

In 2004, I opened a pre-farmer training school in Ansan, Gyeonggi, at the request of the organization. The following year, I opened a school for urban farmers because I found that farming is more urgently needed in the urban areas than in the rural communities.

I am not forcing my farming style. There are many different styles in farming, and each has its own style. My farming ways are a result of my disability.

Can urban farming be a solution for an aging society?

Someday the limit of urban agriculture will come, but it can be a safety net for a society. When people grow older or become unemployed, farming protects them from starvation.