Meeting the mother of the Olle Trails: an odyssey

Meeting the mother of the Olle Trails: an odyssey 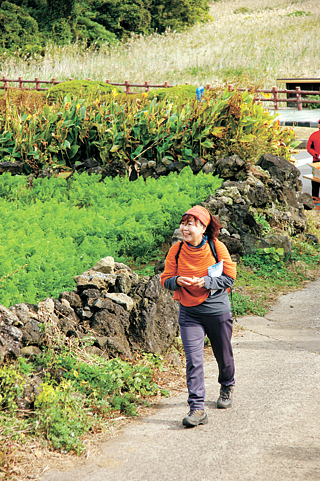 I imagined a woman with a strong physical presence, a smoker of three or four packs of cigarettes a day with a husky voice and considerable charisma. My interview subject’s reputation precedes her: she started the craze for walking in this country with the Jeju Olle Trails.

But on finally meeting Seo Myung-sook, CEO of Jeju Olle, the only expectation that came partly true was that she used to smoke - but quit, disgusted by the continuing cigarette price hikes. Seo had a small frame and, at 60, was the perfect middle-aged belle. It’s a reflection of Seo’s popularity that if she ever chose to run for the national assembly or for governor of Jeju, many are sure she’d be elected handily.

I have to ask a tiresome question. Although the Olle Trails are famous and admired, they are also blamed for rising land prices, a population increase in Jeju and damage to the environment.

That is an exaggeration. Is there anything in this world that has no consequences? That sort of side-effect is something that we must accept. What happens when conglomerates build golf courses, or ultra-luxurious resorts? If you have eyes, take a look. In the case of the Olle Trails, we simply and humbly developed the land. We restored walking trails that existed in the past, and all that we did was to enrich peoples’ spirits. A modern person’s life isn’t simple. Isn’t everyone moaning that they’re suffering, that life’s hard, that it’s burdensome? People find rest on Jeju Island. That is why people are giving up on their busy lives to come over. Land prices are rising because there is a limit to the land. All the same, one can find a spot and live [here] compared to Seoul.

How do you think Henry David Thoreau, author of “Walden,” would react if he saw the Olle Trails? He emphasized that untouched land was most important.

When thinking of Thoreau, my heart begins to flutter. He’s one who discerned the modern person’s soul. Visiting Walden Pond was my life’s romantic fantasy. Thoreau built a shack on the lakeside nearby Concord, Massachusetts and hiked there for the rest of his life. Why was a member of the elite of that time like that? There is a hidden meaning within. As it is known, [he] and [Ralph Waldo] Emerson acted in defiance of conformity. I view Thoreau as being prescient, aware of the environmental destruction resulting from mechanical civilization and the present circumstance of spiritual devastation. Searching for the soul’s sanctuary within nature was a struggle. [He] cast off everything and went into the forest. In the case of Thoreau, he could enter the North American continent’s vast interior and live there in nature as a given. But our circumstances are different. The Korean peninsula is very small. The population [density] is murderously high. Thoreau’s enjoyment of an idealistic naturalistic lifestyle is impossible. Therefore, at least, the [intent] was that through the development, one could soothe one’s self from the troubles of life while walking upon the Olle Trails. If Thoreau had met me, he [would have] rubbed my cheeks happily, saying “Jeju grandma, you did well.”

I heard that while you were walking the [pilgrimage route of] Camino de Santiago in Spain, a Brit you met proposed the idea of the Olle Trails. There is interest in the Jeju Olle Trails outside Korea. How’s the progress of the Olle Trails being built in Mongolia? If one goes to Mongolia, isn’t it all steppe anyway?

It may sound quite sudden, but first I have to explain my relationship with Mongolia, and going forward, [the] Jeju people’s relationship with Mongolia. For over 100 years, Jeju was dominated by the Mongols. Without doubt our blood is mixed. Maybe that’s why Mongolia doesn’t seem like a foreign country to me. So, when I received an invitation [from Mongolia], I didn’t hesitate to go. If one is a Korean, don’t they carry that Mongolian blue spot above their rear? There’s probably Mongolian blood running in my veins.

It’s an old saying that Mongolians are pure. I don’t know. The circumstances aren’t normal. Rapid industrialization and urbanization is ongoing. The past straightforward paths people used to travel on are [being] paved and are disappearing without a trace. The trails traveled by the descendants of Genghis Khan should be restored to their previous state before it’s too late. The Olle Trail will open in June. If you’re skeptical, buy a plane ticket and let’s go together. A wise answer to a silly question, the answer to our questions lies in the site. If you go, you’ll know.

How is the Olle Trail in Kyushu, Japan, that was fashioned five years ago? Is it successful?

The people of Kyushu seek it out. It was a joint private and public effort. With the steep decline of tourists to Japan due to the Fukushima reactor accident, they came to me to try benchmarking the Jeju Olle Trail. The Kyushu Olleh Trail was a great success. In the old days, people just went to Beppu (Northern Kyushu) and bathed in the Yufuin hot springs and went shopping in Fukuoka. They would take pictures, bathe, shop and leave. At the most it was a three-day itinerary and the journey would end. Now it’s different. One can feel nature with all five senses while going about on foot. Of course, the duration of stays is increasing and the local economy has been revitalized. While going and resting, resting and going, one will see Kyushu’s exposed skin. The 200 kilometer Kyushu Olle Trail became a contemplative space for locals and tourists alike.

There’s an elegant aphorism on trails by Laozi and Robert Frost wrote a poem reflecting on an untraveled road. Why are poets stuck on paths?

The walk of life is similar. With my 32-year-old son, we lived like enemies, but recently, we’ve started talking. Seogwipo (in southern Jeju) is my hometown. It was fate that my father from Musan, Hamgyong (present-day North Korea) was conscripted by the [North Korean Army], captured and brought to a prisoner camp at Geoje Island as a POW and caught the eye of a Seogwipo maiden, planting roots on Jeju Island.

I stammered in childhood and it was hard to make friends. During elementary school days, I walked around the neighborhood alone. I went to university in Seoul and graduated, became a reporter, then an editor-in-chief of a weekly newsmagazine, editor-in-chief of Ohmynews and did well for a small-town girl.

But then, my heart felt empty. On lonely nights, I dreamt of Seogwipo. I couldn’t endure missing the warangwarang [sounds of the loud beach waves crashing] of my childhood. I dropped everything and chose to walk on the Santiago pilgrimage route for my first destination. It had nothing to do with religion. It was an existential crisis for me. Even then, I walked and walked and walked like a pilgrim. I thought of the idea of building a trail on Seogwipo, more beautiful than Santiago. I was thunderstruck. The 70 ris (traditional East Asian measurement roughly equivalent to 392 meters) of Seogwipo are truly beautiful. There was a pop song back in the day, “Do you know Seogwipo? Beautiful that beach and wanting shining sun, unbearable to leave, even for an instant.”

The journey to meet Seo on Jeju Island was an arduous one. Due to a storm, the plane circled around and around Jeju International Airport for 40 minutes. I trembled during the eternal wait to land. I wondered how people who went to Jeju tolerated this. Eating braised galchi, or cutlassfish, at the interview was pleasant.

On my return, the words of Lu Xun came to mind. “I thought hope cannot be said to exist, nor can it be said not to exist. It is just like roads across the earth. For actually the earth had no roads to begin with, but when many men pass one way, a road is made.” Seo is a Seogwipoo woman who has made such a road entirely on her own.