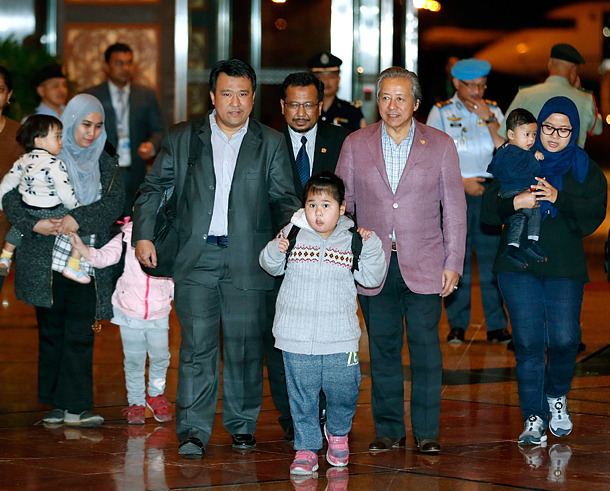 Malaysians who were stranded in Pyongyang walk with Malaysian Foreign Minister Anifah Aman, center right, after arriving at Kuala Lumpur International airport on Friday. Malaysia on Thursday agreed to release the body of Kim Jong-nam. [AP/YONHAP]

The corpse of North Korean leader Kim Jong-un’s half brother, murdered at a Malaysian airport in February, was sent to Pyongyang Friday, after a diplomatic deal.

Malaysia and North Korea announced Thursday that they agreed to the exchange of the corpse of Kim Jong-nam for nine Malaysian nationals detained in Pyongyang. In addition, two North Koreans suspected of involvement in the murder also left Malaysia for Pyongyang on the same plane with the body.

“Following the completion of the autopsy on the deceased and receipt of a letter from his family requesting the remains be returned to North Korea, the coroner has approved the release of the body,” Malaysian Prime Minister Najib Razak said Thursday in a statement.

He said nine Malaysians who were barred from leaving the North were scheduled to leave Pyongyang in the evening. The three embassy workers and six family members including four children arrived at Kuala Lumpur early Friday morning.

The two countries agreed that Kim’s corpse will be handed over to his family in the North, sparking speculation about who will actually claim it. The whereabouts of his current wife and children are not known after they reportedly left their home in Macau.

Kim Jong-nam, the eldest son of the late North Korean leader Kim Jong-il, was killed at Kuala Lumpur International Airport on Feb. 13 by two women who smeared his face with VX nerve agent, which is banned by the Chemical Weapons Convention.

As a part of the deal, Malaysia allowed their departures.

They reportedly left for Pyongyang in the afternoon, using an Air China flight.

Malaysia is one of the few countries that maintain diplomatic relations with the North, but the relationship was sorely strained by the brazen murder.

Pyongyang banned all Malaysians in North Korea from leaving the country until Kim’s corpse was repatriated. Malaysia responded that it was abhorrent to hold its citizens hostage and imposed a similar exit ban on North Koreans.