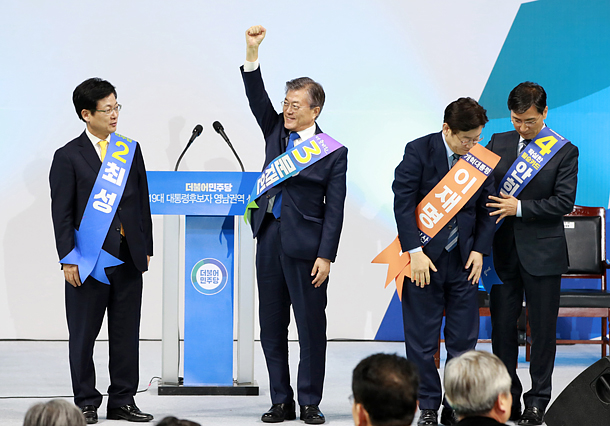 Former DP Chairman Moon Jae-in, second from left, raises his fist at his victory at the primary held at the Sajik Indoor Gymnasium in Busan, coming ahead of the other presidential contenders, Goyang Mayor Choi Sung, to the far left, and Seongnam Mayor Lee Jae-myung and South Chungcheong Governor An Hee-jung. [YONHAP]

Democratic Party presidential frontrunner Moon Jae-in achieved a landslide victory in the Busan primary on Friday, bolstering his chances of winning the party nomination with only one primary left next week.

Moon won 64.7 percent, or 128,429 votes, and easily topped the Gyeongsang primary with more than a 45 percent gap between himself and Seongnam Mayor Lee Jae-myung, who won 18.5 percent. South Chungcheong Governor An Hee-jung came in third with 16.6 percent. Goyang Mayor Choi Sung received a scant 0.2 percent.

With his third consecutive primary victory, Moon may be only two days from becoming the Democratic Party’s standard-bearer in the final primary on Monday in the Seoul, Gyeonggi and Gangwon regions.

For this year’s four primaries, the Democratic Party (DP) is allowing non-members to take part as long as they register beforehand.

The final tally was a combination of March 22 voting by both DP members and non-members at voting booths in the Gyeongsang region, a telephone survey of the two groups on Wednesday and Thursday, and Friday voting by DP delegates at Sajik stadium in Busan. The delegates are senior members of the party.

Touching on the Gyeongsang region’s long history of supporting the Liberty Korea Party (LKP) and its conservative lawmakers, in his speech Moon questioned what Gyeongsang constituents had received in return under the two previous conservative governments.

“The population has shrunk and unemployment has risen,” he said. “The local economy is now in ruins. I already have set up a blueprint in which the dream of Gyeongsang is embedded. Busan will be transformed into the maritime capital.”

Addressing the arrest of former President Park Geun-hye, Moon said people in the region have been tricked by her government, adding, “Gyeonsang’s unconditional support [for Park and the LKP] has ended in the collapse of the local economy.”

In total vote counts from the three primaries, Moon led the race with 59 percent, followed by An with 22.6 percent. Lee came in third with 18.2.

While Governor An is far behind Moon, he will maximize his campaigning efforts to appeal to registered voters in Seoul and Gyeonggi for the final primary Monday. Both An and Lee are aiming to drag Moon’s total vote counts below 50 percent in order to hold a run-off election. This calculation is based on the fact that 60 percent of the DP’s 2.1 million registered voters for its primary race reside in the Seoul and Gyeonggi areas.

The two campaigns hope that, should Moon suffer a huge decline in vote counts on Monday, his tallied counts could drop below 50 percent, which will force him to contest with the second-most favored candidate in the April 8 run-off election.

“I’ll do my best in the capital area to avoid the run-off race,” said Moon.

For the Seoul primary, the DP is conducting telephone surveys of both party members and non-members in Seoul, Gyeonggi, and Gangwon from Friday through Sunday. If none of the DP’s three main contenders wins a majority in the Monday’s primary, the DP will move on to a run-off election in which the top two candidates compete on April 8.