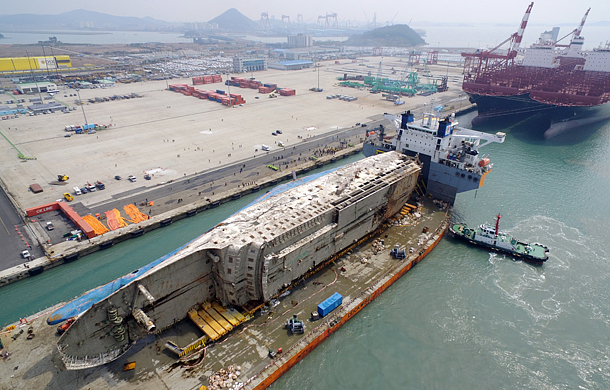 The salvaged Sewol ferry arrives at the southwestern port of Mokpo on Friday afternoon, 1,081 days after it sailed from Incheon to Jeju Island, ultimately capsizing on April 16, 2014, leaving 304 dead. [YONHAP]

A semi-submersible ship carrying the ill-fated ferry left for Mokpo New Port, 370 kilometers (229 miles) south of Seoul, at 7 a.m. Friday. The transporter carrying the Sewol reached the port at 1 p.m., six days after Sewol was completely raised from the sea in waters off Jindo, an island in South Jeolla.

Lee Cheol-jo, a Ministry of Oceans and Fisheries official overseeing the salvaging project, said during a press briefing in Mokpo that the operation to disconnect the ferry from the semi-submersible ship and place it in a dry dock should be complete by Thursday. The official said the timing was determined in consideration of tidal currents in the sea area. “We are expecting to have the weakest tidal currents between April 4 and 8,” said Lee.

To move the ferry to the land, officials will drain the wreck of sea water and oil and disconnect it from the semi-submersible, which is connected via welding to make sure it is firmly fixed.

After the ferry is placed on land, safety and sanitary checks will be performed before launching a search for the remains of the nine missing victims, which may be inside the ship. The search is expected to begin around April 10.

The families of the nine victims left their makeshift homes in Paengmok harbor for the Mokpo port to see Sewol up close. Their departure from Paengmok harbor marked an end to their three-year stay there.

“This is only the beginning,” Park Eun-mi, the mother of Huh Da-yoon, one of the nine missing, told the JoongAng Ilbo. “No one should get hurt [during the search operation]. Safety checks must be carried out before the search.”

The government initially favored cutting the passenger cabin and setting it upright on land, as this might make it safer for investigators. The families of the nine victims strongly opposed the idea, citing the chances of damaging the remains during the process. The families are also concerned that cutting the ship would make it harder to find the cause of the sinking.

The government has yet to decide how it will conduct the search.

Prosecutors noted in their report in October 2014 that the heavy cargo was not properly tied in place and had shifted around, worsening the tilt, and the ferry could not recover its balance due to sea water flooding the vessel.