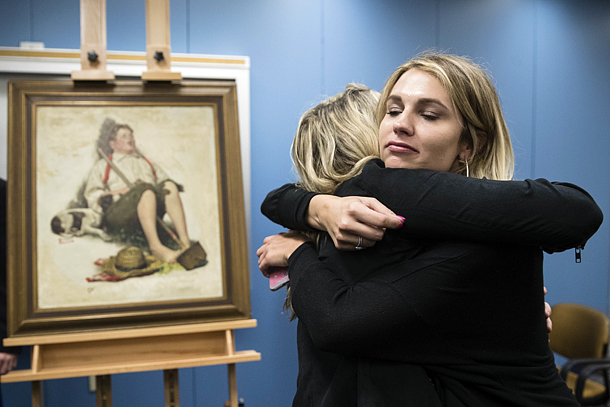 Emily Murta, right, and Kaitlin Grant embrace during a news conference regarding the newly recovered Norman Rockwell painting, that belonged to their grandfather Robert Grant and was stolen more than 40 years ago, at the federal building in Philadelphia, on Friday. The painting, sometimes called “Lazybones” or “Boy Asleep with Hoe,” graced the cover of the Sept. 6, 1919, edition of the Saturday Evening Post. [AP/YONHAP]

PHILADELPHIA - A family who lost a Norman Rockwell painting in a burglary at their home over 40 years ago got it back Friday and knew for sure it was theirs because of a scrape and hole the exact size of the butt-end of a pool cue.

The 1919 painting, valued at $1 million and known as “Taking a Break” and “Lazybones,” was returned to members of the Grant family by FBI art-crimes agents in Philadelphia. The piece was one of a number of items stolen from the family’s home in Cherry Hill, New Jersey, during the June 30, 1976, break-in.

After the FBI recently went to the media with a story of the missing painting in hopes of generating tips, an antiques dealer who had the painting hanging in his home for nearly four decades came forward.

The dealer, whose name has not been released, had thought the painting was just a copy and couldn’t manage to sell it, U.S. Attorney Louis Lappen said.

How the Grant family came to own the painting might be an even better story.

Robert Grant was playing pool at a friend’s house in 1954 when he drew his cue back a bit too dramatically, damaging one of four Norman Rockwell paintings in the room.

In a “you break it, you buy it” moment, Grant paid the pal $50 for the piece, according to his son. The artwork depicts a boy sleeping on the ground, his dozing dog’s head in his lap, and the hoe he should be using for chores perched between his knees.

For Grant’s children, being reunited with the painting was emotional.

“It was the one thing in the house that everybody cared about because my dad thought it was such a special thing,” John Grant said. His parents are now deceased.

The work was insured for $15,000, and insurer Chubb made a payout to the Grants back in the 1970s. With that payment, Chubb retained ownership of the missing painting, said Robert Poliseno, regional executive officer of Chubb’s Mid-Atlantic Region. Once the painting was found, the insurer decided “the right thing to do” was return the painting to the family for the same $15,000, he said. The company will donate that payment to the Norman Rockwell Museum in Stockbridge, Massachusetts, he said.

How the antiques dealer ended up with the painting wasn’t revealed, but FBI agent Jake Archer said the dealer isn’t suspected of stealing it. Agents are working up a composite of who might have committed the burglary, he said, but no information would be released.

What happens with the painting going forward is uncertain.

“I’m one of six kids, so we’ll store it for now and talk about it,” she said.