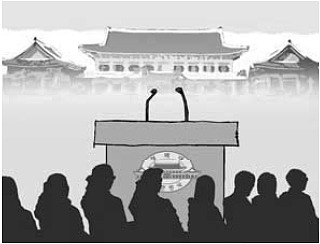 The Koreans whom I meet are confused to a degree that I have never witnessed. It is not merely that they fail to comprehend the profound geopolitical shifts taking place today, but they appear not even to realize that they are confused.

They smile and go about their daily work as usual, but they have no idea what the future holds for them, and they cannot even articulate their concerns.

This confusion is a result of the simultaneous conclusion of five major historical cycles at approximately the same time in Korea. They want to attribute the closing of stores and businesses, or the protests against the government, to the current administration, but have difficulty seeing how such changes are related to shifts in culture, in the value system that supports the Republic of Korea, which are so profound in their implications that they are invisible.

The smallest historical cycle is the five year term of President Park Geun-hye which is ending in the predictable wave of scandals. This cycle is rather predictable in Korean politics, the result of the government losing its authority in the eyes of government officials and citizens.

In addition, the larger cycle of ten years of conservative leadership is also drawing to a painful close, after larger-than-life promises to stimulate the economy through freewheeling business deals, the end of regulation and the degrading of the civil service. As the full extent of the damage done to Korean infrastructure and institutions is revealed, it may result in a profound shift in mood and direction for Korea that is so strong that it pushes aside many of our assumptions about politics.

But the larger economic structure of high growth based on the export of finished products to the United States, and the rest of the world, is also drawing to a close. The assumption of 1960 that unending economic growth could be produced by coupling human labor to the domestic production of plastic and steel is quickly losing its authority. The shift is in part because Korea is less competitive in smart phones and ships, but it is also because those industries are increasingly sunset industries.

Koreans assumed that export-driven growth was a given and that if it did not work properly the reason was either that Koreans needed to work harder or to be more innovative. But showering government money on fading industries will not put off the inevitable. Korea may soon find itself back where it was in 1960: wondering how to increase domestic agricultural production while improving welfare for the general population.

But that is not all! There is an even bigger cycle that is coming to an end: The commitment of the United States to a vision of globalism based on free trade and the espousal of global governance based on universal values. That cycle was launched at the Yalta conference and codified with the founding of the United Nations in 1945. It is falling apart right before our eyes.

Koreans assume that it is as natural for the United States to advocate such global standards as it was for the sun to rise in the East and set in the West.

But in fact, the United States has its origins as an isolationist country and the burdens of fifteen years of foreign wars have decisively pushed the domestic mood towards the domestic agenda. Economic nationalism will continue to spread around the world and Koreans will have no choice but to focus on their own domestic economy in response.

There is one final historical cycle ending this moment and that is the dominance of the West in the global economy and in the establishment of universal cultural norms. When Britain humiliated China in the First Opium War (1839–1842), it employed its exclusive control of new industrial technologies to establish an absolute authority which would leave Asians struggling for 150 years to define themselves.

But that entire order is coming quickly to its end. American and Western institutions are decaying, in much the same manner that Chinese institutions decayed in the period leading up to the Opium Wars. China in specific, and Asia as a whole, has regained the share of the global economy that it held before the nineteenth century, and for most of human history.

We can expect a massive shift in culture and in values to take place over the next decade as this geopolitical shift makes itself felt globally.

Koreans are confused because these five transitions are ongoing and they radically alter the rules that were assumed to be natural and eternal. Many attribute current changes to short-term cycles and turn a blind eye to the long term shifts. But the uncertainty we face is a product of those larger changes and unless Korean intellectuals engage with them seriously, the confusion will only deepen going forward.