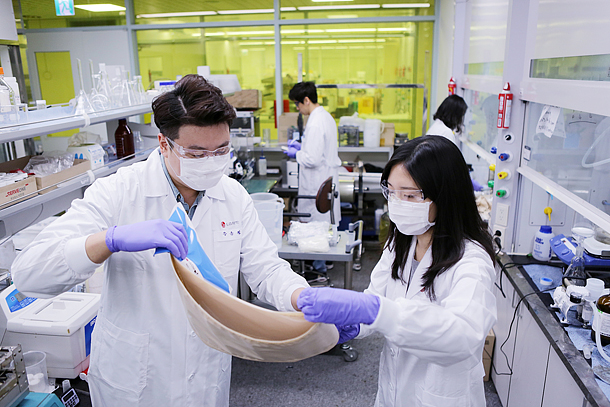 For any player in any industry around the globe, adapting to rapidly changing market dynamics and developing products to meet vast consumer demand often come as key concerns in their future strategy to gain market share and, ultimately, to survive. LG Chem, the largest chemical company in Korea, is no stranger to this cold reality, which is why the battery maker decided to pour as much as 1 trillion won ($895 million) this year into research and development.

During a press conference held at its R&D Park in Daejeon, some 150 kilometers (93 miles) south of Seoul, Park Jin-soo, the vice chairman and CEO of LG Chem, the nation’s top battery maker, discussed the future vision of his company, including diversifying its portfolio in four different sectors - energy, water, bio and advanced materials - through hefty R&D investment.

“LG Chem plans to invest about 1 trillion won into R&D this year and currently about 5,300 researchers are conducting research in various fields,” said Park. “About 30 percent will be allocated for R&D in batteries while about 10 to 20 percent each will be spent on other fields such as basic materials, information and electrical materials, life science and other new businesses of the company.” The amount accounts for about 4 percent of its sales. In 2016, LG Chem posted 20.6 trillion won in sales and 1.9 trillion won in profit.

LG Chem, whose R&D investment about four decades ago stood at a mere 3.5 billion won, saw its R&D spending skyrocket over the years - last year’s total amounted to 780 billion won. And after pouring in 1 trillion won this year, the chemical giant hopes to increase its expenditure about 10 percent a year to reach 1.4 trillion won by 2020.

LG Chem expects to accrue as much as 8.5 trillion won in sales of new products developed through R&D this year, and intends to double the figure by 2020 and make 16.3 trillion won through selling newly developed products.

Although the company boasts a diverse portfolio that includes petrochemical and materials, it is largely known by the public for its batteries. LG-Chem-made batteries go into various consumer products such as smartphones, although new demand from the growing electronic vehicle market is fast becoming the company’s new cash-cow.

Park explained even though the company continues its R&D efforts to meet the new demand, it will take time before it can see any palpable outcome.

“[Developing] innovative batteries will require about 10 years,” said the chief executive. “But we may be able to see the result to certain extent after 5 years. After 10 years, we hope to come up with batteries half as expensive as today’s or with much improved safety and guaranteed driving distance.”

Developing cutting-edge technology in the life science and pharmaceutical fields, which LG Chem has newly jumped into through absorbing LG Life Sciences last year, is also at the top of the company’s future agenda. “As I explained during the merger, we hope to grow the size of sales [from life science and pharmaceutical] to 2.5 trillion won by 2025,” said Park. “Development of new drugs is pivotal.”

Still, the company will have to stay at the top of the other industries it already has competitive edge in such as materials in order to support its R&D initiative. The superabsorbent polymers developed by LG Chem are already used in various products such as diapers and feminine hygiene products. Its safety-reinforced separator, a key component of lithium-ion polymer batteries, can withstand as much as 200 degrees Celsius. SRS is used to keep batteries from catching fire when heated to high temperatures.

LG Chem’s main concern for the near future, however, comes from neighboring China. About one-third of the company’s total sales comes from China but only about 70 percent of its factories there are under operation at the moment. Some market insiders are concerned that the Chinese government’s plan to cultivate its battery and electric vehicle industries will hamper LG Chem from fully operating its factories, not to mention its China-bound orders may shrink as a result.

Despite such a gloomy outlook, the management of LG Chem remained positive about its operation in China. “We managed to increase the rate of operation from 50 percent to 70 percent due to growing demand of our products around the world,” said Park, who explained that China-made products don’t stay in China but are shipped out to other parts of the world. “And we have battery factories in other parts of the world including Korea and the United States, while one in Poland is currently under construction.” Upon construction, the Poland plant will be able to cover the demand in Europe stemming from Germany and France.

At the end of the day, whether LG Chem will be able to maintain sizeable market share in China will come down to how competitive its battery and energy storage system will be down the road. “Right now, the Chinese government doesn’t provide subsidies on cars that use non-China-made batteries,” said an industry source. “The subsidy, however, will be lifted by around 2020, which means by then, it’s going to be about who holds the technological edge over the others.”