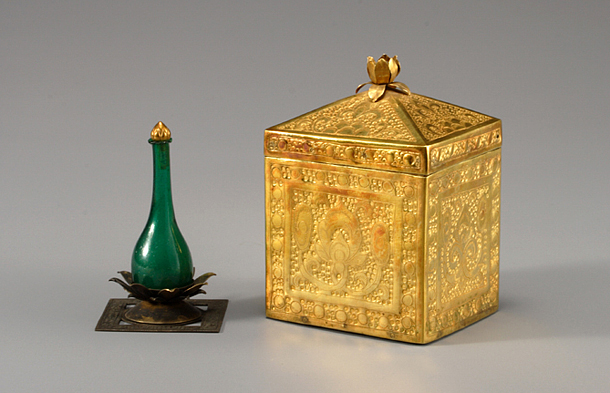 Name: Reliquaries from the Five-story Stone Pagoda in Wanggung-ri, Iksan

These relics were found in 1965 in the platform and the roofstone of the first tier of the pagoda during the course of repairing the five-story stone pagoda (National Treasure No. 289) in Wanggung-ri, Iksan, which is known as the site of the Royal Palace of the Mahan Dynasty.

A bronze standing statue of Buddha with a mandorla (Buddhist halo of light) and pedestal, along with a ceremonial hand bell, was found from the eastern part of the hole on the top side of the platform.

The relics were securely contained in a double-walled reliquary.

The inner compartment of the reliquary containing the green glass sarira bottle has a lid inscribed with lotus bud and bead patterns.