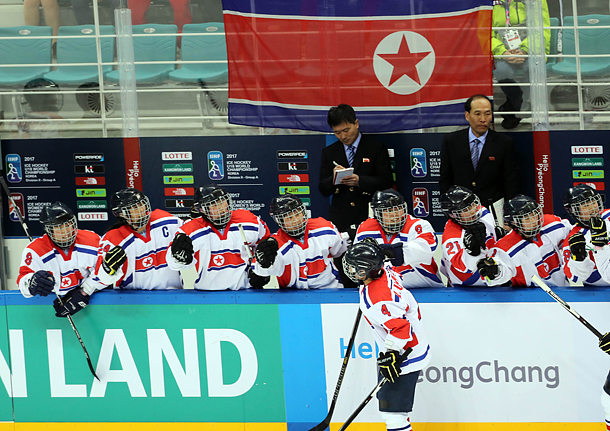 Kim Un-hyang of the North Korean women’s hockey team high fives with her teammates on the sideline after scoring the team’s first goal in a match against Australia at the International Ice Hockey Federation Women’s World Championship Division II Group A at Gangneung Hockey Centre in Gangneung, Gangwon, on Sunday. [YONHAP]

GANGNEUNG - Hundreds of South Korean supporters were on hand to root for North Korean players at the start of the women’s hockey world championships on Sunday.

The Gangneung Hockey Centre and Kwandong Hockey Centre will be the two venues for the tournament, which will wrap up on April 8. The competition doubles as a test event for the 2018 PyeongChang Winter Olympics.

But the loss clearly was not for any lack of support.

Nearly 300 members of a civic group, the South Korean Committee for the Joint Implementation of the June 15 Summit Declaration, took up a section across from the North Korean bench at the arena, banging thundersticks and chanting messages like, “We Are One!” and “Go Korea!” They waved the Korean Unification Flag, with the whole Korean Peninsula colored in blue, and also donned sweaters bearing the same image.

The committee was formed in 2005 to carry out the philosophy and handle issues raised in the joint North-South declaration following the first inter-Korean summit on June 15, 2000. The landmark declaration outlines inter-Korean reconciliation and economic cooperation.

The committee members will attend all five North Korean games during the tournament, including the highly anticipated showdown versus South Korea at 9 p.m. Thursday.

The all-Korea hockey game will come on the eve of a women’s football match between the countries in Pyongyang. These contests could help ease strained inter-Korean relations and exchanges sparked by North Korea’s nuclear and missile programs, though the South Korean government has downplayed the significance of the occasion. 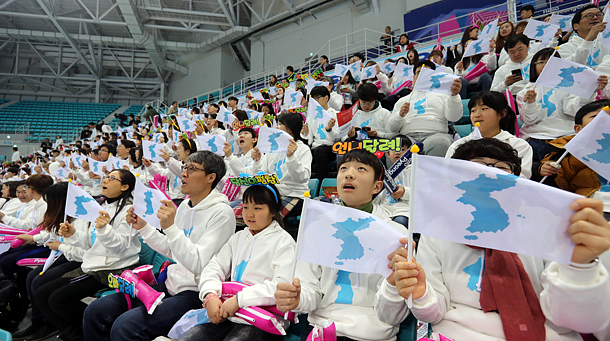 The delegation of 20 players and 10 coaches and officials landed at Incheon International Airport via Beijing.

The North Koreans were guarded by some 300 police officers as they left the airport without answering questions from the media. Some waved at the cameras after they boarded a bus bound for Gangneung.

North Korean athletes’ visits to South Korea need Seoul’s approval, as the two Koreas are technically in a state of war since the 1950-53 Korean War ended in a truce, not a peace treaty.

South Korea sits 23rd in the current IIHF rankings, three spots above North Korea. The competition will also feature the Netherlands, ranked 19th, Britain, ranked 21st, Slovenia, ranked 24th, and Australia, ranked 28th. The top nation after the round-robin play will be promoted to Division I Group B next year, while the last-place nation will be relegated to Division II Group B in 2018.