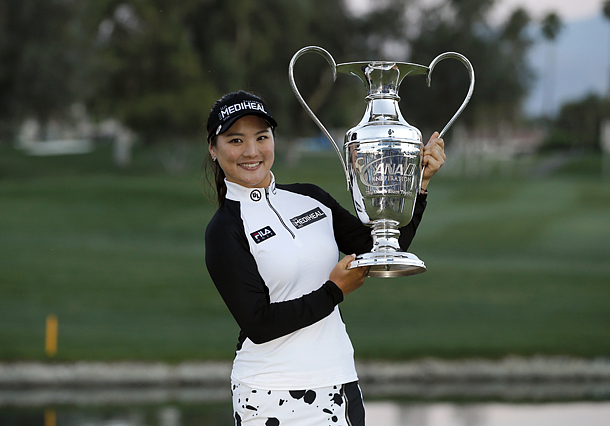 Ryu So-yeon poses for a picture with a trophy after winning the ANA Inspiration in the first playoff hole against Lexi Thompson at Rancho Mirage Mission Hills Country Club in California on Sunday. [AP/YONHAP] 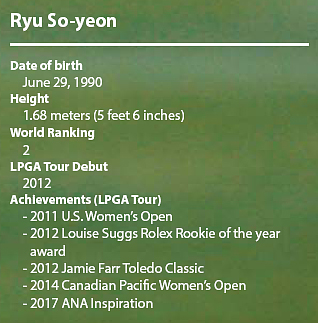 Ryu shot a bogey free round of 68, finishing the tournament at 14 under par, 274, to tie the lead with Thompson.

While Thompson made a bogey on the first playoff hole, Ryu made a birdie to win the tournament.

“During play, I didn’t even check the leaderboard but I thought Lexi played really, really well,” Ryu said during her interview with LPGA after the round. “I thought, I’m well behind so all I wanted to do was just play and enjoy my game. I was paired with my best friend, Park In-bee today, so I just really wanted to have a really good, strong finish.” 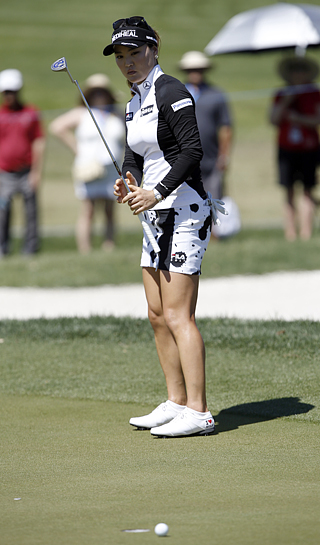 Ryu So-yeon misses a birdie putt on the second hole during the final round of the ANA Inspiration. [AP/YONHPA]

This was Ryu’s first victory since the CN Canadian Pacific Womens’ Open in August 2014. It took Ryu two years and eight months to win a tournament.

Ryu was the only player among the top 10 Rolex World rankings to not have won a tournament for more than two years. Since her latest LPGA tour victory, Ryu played in 61 tournaments and finished in the top 10 a total of 29 times, but always came up short of a victory.

Last year, she decided to change her swing, after which her world ranking dropped slightly, preventing her from competing at the Olympics, but she never regretted her decision and the changes are paying off this season.

In the five tournaments she has played in so far this season, Ryu finished in the top 10 with a scoring average of 68.05 and is ranked first in the 2017 money list.

After Thompson was given a four-strokes penalty on the 12th hole for incorrect ball replacement and signing an incorrect scorecard in the third round, Ryu had her chance.

Until the 11th hole, Thompson led the field with three shots, but with a bogey on the 12th hole and a penalty she dropped to third, suddenly Ryu was only one shot behind the leader, Suzanne Pettersen of Sweden.

“Wasn’t expecting that on whatever hole that was,” Thompson said about the penalty in the interview with the LPGA after the round. “I didn’t intentionally do that. So to the officials, or whatever called in, that was not my purpose. I didn’t even realize I did that.”

Although the penalty dropped her from the lead, Thompson stayed strong and made a birdie on the 13th hole to be tied for the lead with Suzanne Petterson of Sweden.

Thompson then made a birdie on the 15th hole but went back down to second by making a bogey on the 16th hole. But Thompson fought until the end of the round, making a birdie on the last hole, to force a playoff.

“My caddie helped me out tremendously,” Thompson said. “But it was all to the fans. I mean, they helped me get through the rest of the round, which helped me a lot.”

Not only that, Ryu will maintain her top spot on the 2017 money list, winning $405,000 from the tournament, and will also move up a spot in the Rolex World Ranking to second.

The Korean golfers continue to dominate the LPGA tour by winning five of the seven tournaments.

Park, Pettersen and Lee Min-jee of Australia finished tied for third at 13 under par.

Lydia Ko, the top female golfer in the world and defending champion, finished tied for 11th at seven under par.

Up next, the LPGA tour will organize the Lotte Championship, which is hosted by Hershey, from April 12 to 15, in Ko Olina, Hawaii.

Ryu So-yeon misses a birdie putt on the second hole during the final round of the ANA Inspiration. [kang.yoorim@joongang.co.kr]