A tower built by workers

A tower built by workers 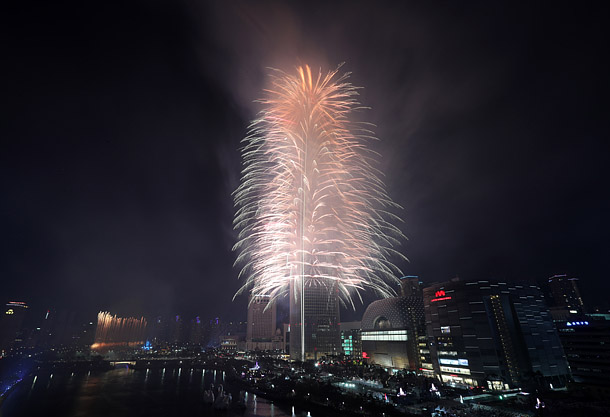 Fireworks mark the inauguration of the Lotte World Tower in southern Seoul on Sunday. [YONHAP]

More than 80 years after it was completed, the 102-story Empire State Building still remains a Manhattan landmark. It has long since lost its prestige as the world’s tallest building, but it nevertheless endures as the undisputed cultural icon of New York City and the United States.

The skyscraper’s historical heritage is underscored by black-and-white photos documenting construction workers tightrope-walking on wire beams with a jungle of buildings under their feet and having lunch or napping in the air without any harness protection. Clad in their shabby work suits, these daredevil “sky boys,” most of them immigrants, were behind the construction of the world’s tallest structure nearly a century ago, and they still remain to this day as a haunting and dualistic symbol of New York.

Korea’s tallest skyscraper, the Lotte World Tower, formally opened on Monday. It drew hype, interest and concern since it began construction seven years ago. A landmark structure can bring immeasurable economic benefits. The Guggenheim Museum in Bilbao turned the industrial Spanish city into a popular tourist destination, drawing in a million visitors every year since it opened in 1997. It became an exemplar of “starachitecture,” architecture that enjoys celebrity-like status, and generated a phenomenon called “the Bilbao effect.”

Another star piece of architecture is the supertall Burj Khalifa in Dubai that helps attract 10 million tourists every year. The shopping mall inside annually earns $5 billion, or 5 percent of the gross domestic product of the United Arab Emirates. Lotte maintains that its commercial and residential high-rise could generate an economic effect of nearly 10 trillion won ($9 billion).

Personally, I was impressed by the building for other reasons. There is a “Wall of Fame” on the fifth floor documenting the entire construction process. “This is the documentation of the sacred human spirit of each and every worker who tended to the exterior construction, hanging on a rope 555 meters [1,820 feet] above the ground and walking on iron beams to tighten each bolt,” a placard says.

The 31-meter-long wall commemorates the labor that 8,820 workers committed to the project of building the country’s tallest building and a new landmark for the nation. The collaborative work of more than 100 days also included 50 foreign workers. The exhibit highlights the workers who reached the highest peak of the structure, the first female and the one who worked the longest hours. Some were recruited with the extraordinary mission of protecting the site against terrorism.

The exhibition hall titled “Builder’s Pride” portrays the workers as heroes. The introductory comment says the hall is dedicated to each worker so that their achievements will be remembered with pride for them, their families and their descendants. A monument bearing their names will also be installed outside the building to remember the workers as part of the structure’s history. Kim Dong-man, former head of the Federation of Korean Trade Unions, said he was touched upon seeing the country’s first architectural structure to share its pride and achievements with the workers that had built it.

Confucius taught that shu, a Chinese word meaning “to regard someone else’s heart as one’s own,” was the golden rule of communalism. There is little that cannot be understood or resolved through dialogue if this golden rule is kept. Labor fights don’t have to be so contentious.

The Confucius teaching of shu has been exemplified by the wall of names in the Lotte World Tower. It pays tribute to the toil, sweat, courage and ingeniousness that workers contributed to the building to ensure it becomes a historical landmark. They fought freezing cold and sizzling heat to build one story after another. Thanks to their silent devotion, the skyscraper showed itself in magnificent scale during a spectacular fireworks display on the eve of its opening day.

*The author is a senior reporter on labor affairs for the JoongAng Ilbo.