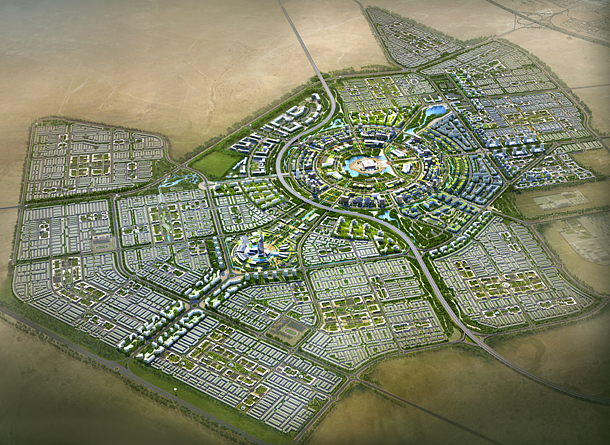 A computer-generated image of South Saad Al-Abdullah in Kuwait, a smart city which the Korean private and public sectors will take major roles in creating. [MINISTRY OF LAND, INFRASTRUCTURE AND TRANSPORT]

The Korean public and private sectors will help build a new city in Kuwait. This will be the first time Korea will construct a so-called smart city abroad.

The Korea Land and Housing Corporation (LH) has signed a contract with Kuwait’s Public Authority for Housing Welfare to lead the project that aims to build a new city called South Saad Al-Abdulla, the Ministry of Land, Infrastructure and Transport said on Monday.

The city is about 30 kilometers (18 miles) west of the capital of Kuwait City and is 64.4 square kilometers (15,913 acres), about 300 percent larger than Korea’s Bundang. The Kuwaiti government plans to make it the first city in the Middle East to be both environmentally friendly and smart.

The Korean Transport Ministry said the LH will manage the project and Korean consortium in which Korea’s city planning firms will come up with plans to design the city. Posco A&C and Hyundai Architects & Engineers will be a few of the companies that will join the consortium.

The consortium will be fully organized in 2018 and Monday’s deal will give the group two years to design the city.

The Korean and Kuwaiti governments will analyze the profitability of the project plans submitted by the consortium in 2019 and will decide whether to proceed as early as 2019. The Korean Transport Ministry, however, said that the date of completion for construction is still undecided.

“This will be the first case of exporting a Korean version of a smart city abroad,” said Kim Seok-ki, a director at the Transport Ministry. “The economically active population in the Middle East is growing a lot faster than the other regions in the world and we expect that the demand for the new cities will remain high in the region. Korean companies will be able to take more major roles in city planning projects in the Middle East further from now on.”

Kuwait currently is working on making nine new cities and the Transport Ministry said the South Saad Al-Abdulla is one of the best among them.

“The new city is very close to the capital and the transportation infrastructure is already well built,” said Kim.

The project is projected to be worth about $4 billion and the transport ministry said it will be able to house up to 40,000 households in the city. Funding for the $4 billion project is still undecided.

The ministry also added that the Kuwaiti government said its people and the government are looking forward to this project as there will be homes available for at least 25,000 households.

Korea and Kuwait have been discussing about the project since its March 2015 summit.

Kuwaiti government announced “Kuwait 2035” earlier this year that includes a set of measures to boost the economy through various projects. The plan focuses on reducing its dependence on oil revenue and building the country as a hub for finance, trade and tourism in the region.