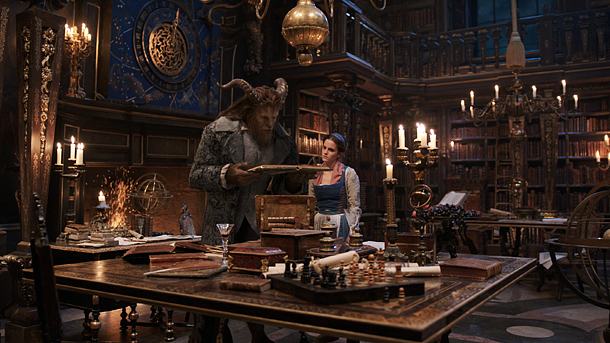 Star-studded films “Ghost in the Shell” and “One-Line” both failed to edge out the hit “Beauty and the Beast” at the box office this weekend.

Disney’s “Beauty and the Beast” ruled Korea’s weekend box office for the third straight weekend, crossing the threshold of four million tickets sold, according to the Korean Film Council on Monday.

The live-action film adapted from the classic eponymous 1991 animated musical sold 652,000 tickets at 1,123 screens from Friday to Monday, earning 5.42 billion won ($4,800,000). Since it dropped on March 16, it has so far sold 4.09 million admissions and raked in 33.73 billion won, beating popular Japanese animation “Your Name” to become the highest-grossing foreign film released in Korea this year.

Action flick “The Prison” stayed in second place in its second weekend by selling 514,000 admissions over the weekend. Telling the tale of prisoners who continue to commit crimes outside of jail and return to their cells every night, the film stars Kim Rae-won and Han Suk-kyu.

Science-fiction action movie “Ghost in the Shell” debuted at third. Based on the internationally-acclaimed story, the film sold 392,000 tickets over the weekend, resulting in a total of 570,000 tickets sold since it dropped on Wednesday.

Revolving around cyborg field commander The Major - who becomes cyber-enhanced to become the perfect soldier to stop the world’s crooks - the story follows her task force, Section 9, which thwarts cyber criminals and hackers.

Crime film “One-Line” featuring Yim Si-wan and Jin Goo debuted at fourth, selling 197,000 admissions from Friday to Sunday. The flick, which depicts a group of swindlers who make a living out of collecting commissions from people who cannot get loans from banks, has so far sold 291,000 tickets since it dropped on Wednesday.

“Hidden Figures” rounded out the top five in its second weekend with 78,600 admissions.