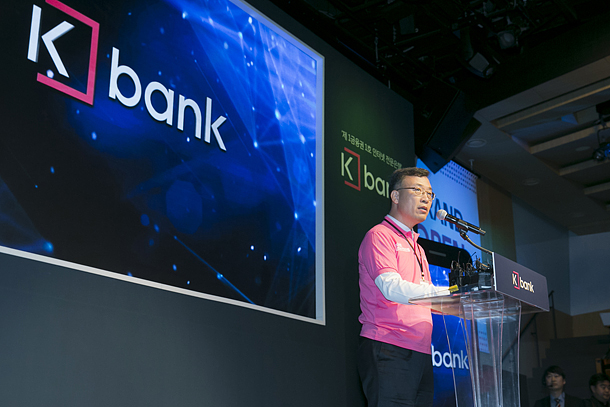 Shim Sung-hoon, president and CEO of K bank, speaks during the bank’s launch ceremony on Monday at KT Square in Jongno District, central Seoul. More than 20,000 new accounts were opened on the first day. [K BANK]

While the bank’s most notable feature might be its complete lack of brick-and-mortar branches, the primary goal of K bank is to provide loans to a wider population than currently available. Interest rates will range from as low as 4.2 percent to as high as 9 percent.

The niche market that K bank is targeting is known in Korea as the “midrate loan market,” where borrowers have a credit score of four to seven on a scale of 1 to 10, with 10 being the worst. These borrowers can theoretically receive loans with interest rates of 5 to 10 percent, but local commercial banks are often reluctant to lend to them, forcing borrowers to turn to savings banks. These savings banks are technically consumer finance companies that often charge rates in the double digits.

K bank believes it can provide less burdensome rates through its cost-cutting business model and a credit rating system that utilizes a bigger pool of data than that available to other banks, allowing it to make more precise and nuanced judgements of borrowers’ ability to repay loans. 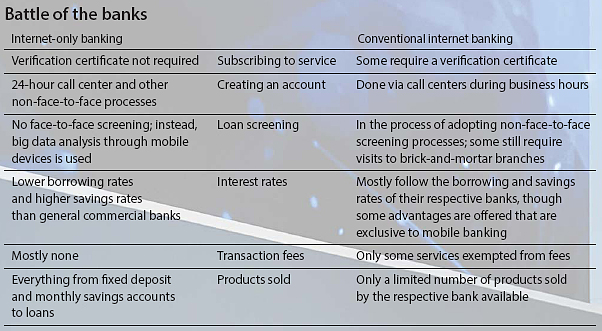 K bank’s main competitor, Kakao Bank, is expected to gain final regulatory approval some time this week. A consortium led by the operator of Korea’s most widely used messaging app, KakaoTalk, is leading the project.

Once they go into operation, K bank and Kakao Bank will “bring innovation to the financial industry beyond competition,” said Yim Jong-yong, chairman of the Financial Services Commission, the country’s financial regulatory agency. The commissioner added that 450 “high-quality jobs” have already been created through the two internet-only banks, and the ripple effect could generate as many as 2,400 jobs in the tech sector.

Still, internet-only banks have some hurdles to overcome to find a solid footing in Korea. For one thing, the Banking Act, a law intended to separate banking from commerce, bars tech companies like KT, a shareholder in K bank, and Kakao from holding more than 10 percent stakes in their banks and pouring in more reserve capital. As a result, they each hold 8 percent in K bank and Kakao Bank.

“We started out with 250 billion won as starting capital,” said Shim Sung-hoon, president and CEO of K bank. “We can run our business for the time being with money we receive from customers as savings, but without additional capital, our BIS ratio [a global standard to measure banks’ capital soundness] may worsen quickly.”