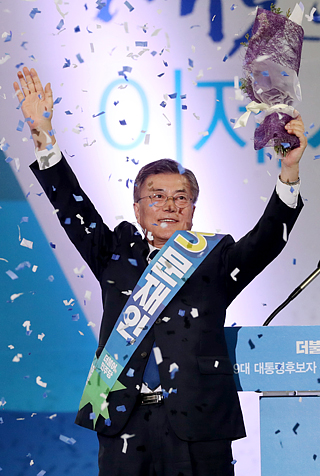 Moon Jae-in, former chairman of the Democratic Party, waves his hands to respond to his supporters as he won the party nomination in the last primary at Gocheok Sky Dome in western Seoul on Monday. [YONHAP]

Presidential frontrunner Moon Jae-in won the Democratic Party nomination on Monday, handily defeating challenges from rivals An Hee-jung and Lee Jae-myung to bid for the second time for the presidency he failed to win in 2012.

In total vote counts from the DP’s four primary races, Moon won 57 percent, or 936,419 votes, a victory that made him the DP nominee to retry for the presidential office in the May 9 snap election.

The tallied vote counts incorporate the outcomes of the DP’s four primary races held from March 27 in the run-up to the final April 3 primary, which was held in Gocheok Stadium in western Seoul.

The Monday primary was for Seoul, Gyeonggi, Gangwon and Jeju and carried the highest stake for the major three DP runners to win because of the massive number of registered voters in the region.

Of the 2.1 million registered voters in the primary, more than 1.3 million reside in the capital area. Lee and An hoped that they would win sizeable votes from the Monday primary to drag Moon’s percentage below 50 percent, but it did not happen.

In his acceptance speech, Moon said there is no ideology that takes priority over the people or the good of the nation. “I declare that we must bring an end to an era of conflict and division,” said the party nominee, who then called on people to do away with all elements that spawn internal division.

“I will lead the country toward justice and unity and away from this era of strife,” Moon promised.

With his clinch of the party nomination, Moon will now bid for the second time for the highest-elected office, which is now vacant following former President Park Geun-hye’s stunning fall from power on March 10.

While Moon has been the most favored candidate in the polls to become commander-in-chief over the past few months, the Moon campaign is nervously watching the fast rise of Ahn Cheol-soo.

Ahn, who left the DP in late 2015 in protest of Moon’s leadership of the party and co-founded the minor People’s Party, has seen his approval go up significantly as the DP primary was shaping up in favor of Moon.

In a poll conducted by The Opinion, Ahn was ahead of Moon in a virtual one on one race with 43.6 to 36.4 percent.

In a virtual three-way race among Moon, Ahn and Hong Joon-pyo, the Liberty Korea Party nominee, Moon was narrowly ahead of Ahn with 36.6 to 32.7 percent. Hong received 10.7 percent. The poll was conducted of 1,000 adults nationwide on Sunday.

While many question the possibility of forging a one-on-one race between Moon and Ahn, as it would require the two conservative parties to drop their bids in order to unite forces with Ahn’s campaign, it came across as a big surprise that Moon ceded his top rank to Ahn in the polls.

With Ahn on the rise, one of the most urgent tasks Moon must address is preventing An’s supporters from flocking to Ahn’s side.

Moon was born during the Korean War on Jan. 24, 1953, to parents who had fled from North Korea to the South in December 1950 to escape Communist rule.

Moon’s parents were among the tens of thousands of refugees who boarded U.S. military ships in what is known as the Hungnam Evacuation. When he was accused of being pro-North by critics, Moon would often cite his family background to refute such claims.

Moon grew up in abject poverty. “Poverty helped me become more independent and responsible,” he said in his memoir, “Destiny.” “I consider poverty at the time a gift. My principle that money is not the most important thing stems from lessons I learned during my youth.”

Moon was admitted into Kyung Hee University on a full scholarship to study law. Soon, he became a student activist fighting against the military strongman Park Chung Hee, father of the now imprisoned former President Park Geun-hye. After his arrest in 1975 for protesting against the Park government, Moon was forcibly called to serve in the army.

He was assigned to the Special Forces unit upon completing boot camp, and he often shows pictures of himself in Special Forces gear to dispel suspicion that he might be too weak on matters of national security.

Moon passed the bar exam in 1980 and hoped to pursue a legal career as a judge, but failed the vetting process because of his student activist career, given that he was still living in a country ruled by a military strongman, Chun Doo Hwan.

He returned to his hometown of Busan to partner with Roh Moo-hyun, who would later become Korea’s 16th president, as human rights lawyer and soon found himself at the center of street protests against the Chun military government, shoulder to shoulder with Roh.

Fast forward to 2003, when he opened the second chapter of his partnership with Roh as his senior secretary for civil affairs. Moon served Roh as his chief of staff in the waning years of his five-year term.

Just over a year after Roh returned home to Bongha Village in Gimhae, South Gyeongsang, the former president was embroiled in a bribery scandal implicating his former aides and family members.

Roh committed suicide 24 days after being questioned at the prosecutors’ office. The composed manner in which Moon took care of Roh’s funeral process earned him the nickname “Roh’s Last Standing Chief of Staff.”

Moon later said he regretted not being better prepared. Four years after his bitter defeat, Moon says this time his desire to win is much stronger. And with his clinch of the DP nomination, he has taken one step closer to getting the job that he formerly lost to his rival Park, who now sits behind bars.

In his speech, he said he would listen to the people to create a “new history” and declared he was “ready” to serve as their president.

In 36 days, Koreans will find out whether Moon can win the presidency to get rid of the “deep-seated social evils,” as he has promised all along on the stump.