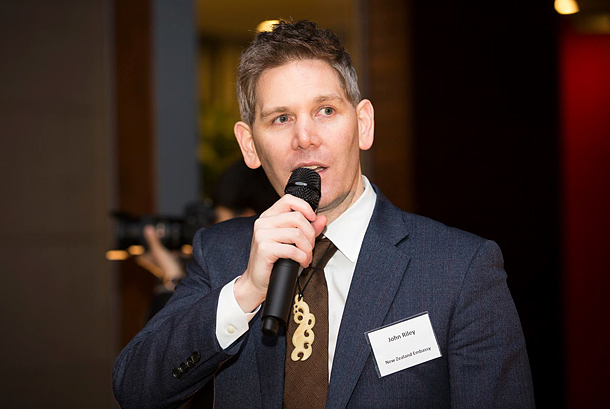 John Riley, deputy head of mission at the New Zealand Embassy, speaks during his farewell party at the residence of Ambassador Clare Fearnley on Friday evening, as he completes his four-year term in his post in Seoul. [EMBASSY OF NEW ZEALAND]

The farewell party for the New Zealand Embassy’s deputy head of mission, John Riley, at the New Zealand ambassador’s residence on Friday was crowded with not only diplomats but friends from all walks of life, including TV personalities from JTBC’s “Non-Summit,” the CEO of a gaming company whose friendship with Riley dates back 20 years and even a former workout buddy of the diplomat.

“I met John for the first time when Guillaume Patry introduced me to him at a fitness center,” said Lee Jun-ro. “He spoke fluent Korean, and since then, we would work out together from time to time. John’s been really kind through the years that I’ve known him.”

“It’s hard to distill down the special qualities that John’s brought to the role here. He’s done all the traditional things of the deputy head of mission,” New Zealand Ambassador to Korea Clare Fearnley said. “Particularly, I’ve got to mention the New Zealand-Korea FTA because in John’s first posting here, we were dreaming of an FTA with Korea, but in the time that John’s been here the second time around, he’s played a crucial role of actually seeing it happen.”

Riley was stationed at the embassy in Seoul for the first time from 2001 to 2005. He has been dispatched to the embassy for the second time from 2013 as the deputy head of mission.

“Because of his fluency in Korean and Te Reo, it’s opened up all sorts of opportunities for John but also for New Zealand and the New Zealand Embassy,” the ambassador said. “We really don’t have anyone quite like John in the New Zealand foreign ministry who’s established himself quite the way he has in social media, and in public diplomacy. A lot of that has come through ‘Where is My Friend’s Home.’”

Riley starred in the JTBC show with members of another show of the broadcasting company, “Non-Summit,” including with his friend Patry, whose friendship dates back 18 years.

Celebrating at the event were regular members of the JTBC programs, including Patry, Julian Quintart, Andreas Varsakopoulos, Sam Okyere, Ilya Belyakov, Sujan Shakya and Terada Takuya; Korean rappers Beenzino and Sanchez, who studied in New Zealand; and a group of Maori residents in Korea.

“These are the people who are giving the Korean people a wider and bigger world view,” Riley said addressing the crowd gathered at the front yard of the residence. “I would like to recognize two of my friends. One of them, if it wasn’t for him, I wouldn’t have gotten to meet all these celebrities, and I wouldn’t have been on TV and that’s my friend of many years, Guillaume, who is also the StarCraft world champion of 1999!”

Patry had introduced Riley to “Where is My Friend’s Home.”

“Another is a friend that not many of you know, and that is Park Hong-seo,” Riley said. “Hong-seo is the one who actually brought Guillaume to Korea. He is my first Korean friend, we were roommates when I studied at the language school of Yonsei University.”

“John is the reason why I am now the head of a gaming company,” said Park, who is CEO of Flex Ball, a game developer. “He is the one who introduced me to StarCraft some 20 years ago when we met as roommates.

“His Maori background, his love for Korea and his language ability really made him the perfect New Zealand diplomat to come to Korea,” Park said. “You saw the Haka tonight, right? He used to do it in our room back in college, too.”

Riley and a group of Maori friends performed the Haka and sang a waiata-a-ringa, a type of traditional Maori music, at the residence.

The diplomat, who has for a total of nearly 10 years been living between New Zealand and Korea for studies and later for his diplomatic career, will return to New Zealand on Saturday. He will be stationed at New Zealand’s Ministry of Foreign Affairs and Trade.

Ardi Barnard will be the next deputy head of mission at the embassy. “I have very, very large Korean-Maori stardom shoes to fill, but I will do my best or at least work hard at it,” Barnard said.