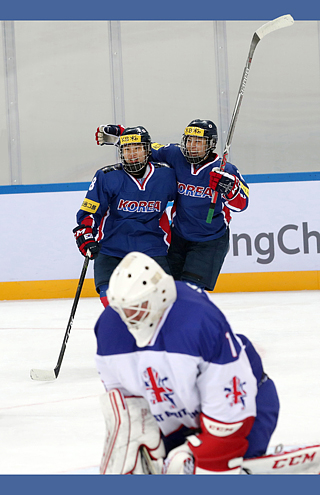 The Korean women’s ice hockey team celebrates after scoring a goal against England at Kwangdong Hockey Centre in Gangneung, Gangwon, on Monday. [YONHAP]

The team, led by head coach Sarah Murray, started off strong by winning 5-1 against Slovenia, ranked 24th, on Sunday and then won 3-1 against England, ranked 22, on Monday.

In Sunday’s match, Kim Hee-won scored the team’s first goal at 4 minutes 36 seconds in the first period. Forwards Choi Ji-yeon and Jo Su-sie both led the team during its first game against Slovenia, scoring one goal each in the second period and an assist. Leading the game by two points, Im Danelle and Park Jong-ah, a native of Gangneung, scored two additional goals in the third period.

During the game against England, Park led the team with one goal and one assist. Park scored a goal during the first period in 15 minutes 55 seconds to help South Korea take an early lead. Right before the end of first period, Park assisted Han Soo-jin’s goal.

In the second period at 4 minutes 7 seconds, the team allowed a goal to England to tie the game. They allowed another chance for England to score a goal in the third period but luckily, it bounced off the goal post. In the third period, Kim Hee-won scored South Korea’s third goal at 14 minutes 43 seconds assisted by Cho Soo-ji.

With two wins, South Korea is tied with the Netherlands in winning points but because it is leading in goal difference points, South Korea is ranked first in the standings. This is by far the best achievement the Korean women’s ice hockey team has made.

In 2016, the South Korean women’s ice hockey team finished second in the event behind Poland. Korea was tied with Poland and England in number of wins and loss but Poland was the winner as they had the highest goal difference.

Despite the times when the Korean women’s ice hockey team was considered as the weakest team, losing to China 30-1 in 2003 and to Japan 29-0 in 2007, the team has shown significant potential. In the most event, at the Sapporo Asian Winter Games, the team won against China for the first time in its 19 year history and recorded their biggest win against Thailand, 20-0.

The North Korean women’s ice hockey team is currently last in the standings, losing 2-1 against Australia on Sunday and 4-2 against the Netherlands on Monday. The event will be played in round-robin format, competition in which each country gets to play against all the other countries in turn.

The South Korean women’s ice hockey team will continue its match against Australia today, against North Korea on Thursday and will play against the Netherlands on Saturday at 9 p.m.

Upon completion of the event, the Korean women’s ice hockey team will get to participate at the 2018 PyeongChang Winter Olympics, automatically qualifying as hosts.