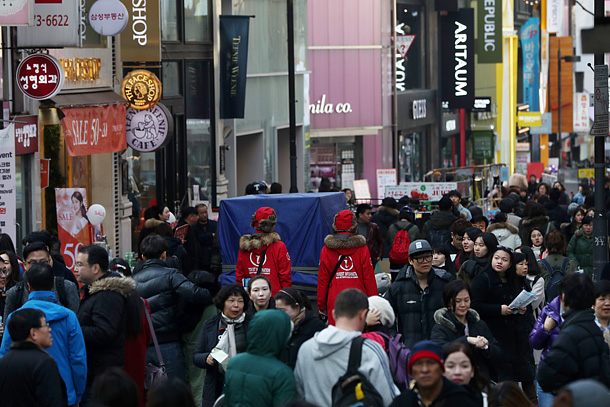 Despite China’s ban on group tours to Korea in apparent retaliation against Seoul’s decision to deploy a controversial U.S. missile defense system in the region, the streets of Myeong-dong, a popular tourist destination in central Seoul, are crowded as usual with travelers. [JOONGANG PHOTO]

China’s apparent retaliation against the U.S. military’s Terminal High Altitude Area Defense (Thaad) missile shield is starting to eat away at the foundation of Seoul-Beijing relations. The first question I have is whether China is taking it out on South Korea because it underestimates our security needs and overestimates the intentions of the United States. The second question is what China gains from the tension. With these questions in mind, I would like to discuss the reality and prospects of an exit.

Still, China claims South Korea has betrayed it with Thaad deployment, which is merely a defensive measure against a growing threat. It is shocking. Beijing practically says Seoul has sided with Washington.

South Korea does not blame China for being partial to North Korea on the nuclear issue. Seoul understands that Beijing’s decision was based on its own interests and tries to convince China. It is inconceivable that China uses extreme expressions like “betrayal” on another sovereign state. Yet it is even harder to for us to understand South Korea letting it go. I wonder what is really going on. Will China gain from retaliating against South Korea for “betrayal?” There won’t be much to gain.

First, it is hard for China to continue the offensive, as the justification is groundless. South Korea’s security interests are critical, but China’s interests over Thaad are relatively trivial. Military experts confirm that Thaad radar’s impact on China’s strategic interests are quite limited. Russia seems to be aware of the limitations and does not fiercely oppose deployment. It would be hard for China to orchestrate extensive retaliation over an issue in which South Korea and China’s interests are so different. China will be pressured to stop retaliation soon if it leads to material damage for South Korea and serious damage to China’s reputation.

Second, Beijing might claim it needs to pressure Seoul now so that the decision can be overturned when a progressive administration comes in after the presidential election next month. But that is not likely. Even if a progressive candidate wins, conservatives can make a comeback in the legislative elections, during which security will surely be a main issue. As the progressive camp knows very well, it is not likely to retract the decision.

Third, China could argue that it should retaliate now in order to deter further security cooperation in missile defense between the United States and South Korea. Again, it is not very feasible. The joint defense status depends on North Korea’s nuclear and missile threats. As the public is increasingly wary of North Korean nuclear threats, the impact of China’s retaliation will be secondary. Moreover, the damage from China’s retaliation could backfire.

Here, we need to note the dynamic nature of our democracy. South Korea has an energetic, political civic spirit that other developing countries — and China — cannot and do not want to follow. In China, power is strong. But in South Korea, society is strong. The world has witnessed the power of public energy in Korea’s latest political scandal. It is the engine that attained our democracy today, fighting against authoritarianism.

South Korea is a unique case in Asia. We take pride in our industrialization and democratization as the two greatest accomplishments in modern history. It is not easy for China to inflict the South Korean people with economic damage when civic energy is at its highest.

Fourth, even with all the aforementioned arguments, some may feel the immediate damage to South Korea is serious. But we can consider it a price for a healthier relationship with China. China has been trying to keep South Korea close, and its efforts have been successful. A South Korean president standing atop the Tiananmen gate is a good example. Even then, there were concerns about our excessive inclination toward China and China’s negligence of us. With the Thaad retaliation, the worries are growing in an alarming way.

Now, South Korea has begun a national reconsideration of China. The presidential election campaign is part of it. Continued retaliation will lead to an extensive review of our China policy. In the end, we will decide to tone down our fantasy in Seoul-Beijing ties and pursue a new normal. It could be a blessing in disguise, as it will surely turn toward a healthier direction.

*The author, a former Korean ambassador to Russia, is a visiting professor at Seoul National University.