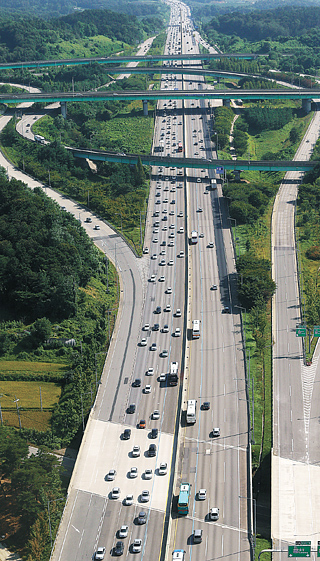 View of the Gyeongbu Expressway’s Anseong junction in Gyeonggi during the Chuseok holiday in 2014. The expressway connecting Seoul and Busan is the government’s most expensive property, worth 10.9 trillion won (9.7 billion dollar). [YONHAP]

The most expensive government-owned property in Korea is a highway connecting the capital of Seoul with the southern port city of Busan, according to the latest records of government-owned assets.

The Gyeongbu Expressway is worth an estimated 10.9 trillion won ($9.7 billion), while the total value of government-owned assets is 1,039.2 trillion won, up 4.7 percent from last year, the Ministry of Strategy and Finance revealed Tuesday.

This is the first time the total value of government-owned property has exceeded 1,000 trillion won.

The Seohaean Expressway, which snakes along the west coast from Seoul to Mokpo is the second most expensive property, valued at 6.54 trillion won, followed by the Namhae Expressway which traverses the south from Busan to Suncheon, worth 6.29 trillion won.

Among buildings, the government’s main administrative complex in Sejong, which hosts major departments including the Finance Ministry, is the most expensive, valued at 471.6 billion won, followed by a second complex in the same city worth 426.3 billion won.

The government’s third-most expensive building is the Asia Culture Center in the southeastern city of Gwangju, worth 300 billion won, followed by the National Assembly Building in Yeouido, western Seoul, at 226.4 billion won, and the Daejeon Government Complex at 226.3 billion won.

Among intangible assets, the comprehensive information network known as Uni-pass, which is owned by the Korea Customs Service, is the most valuable at 100.7 billion won. The system, which the customs agency installed last May, is an automated customs administration system that not only levies taxes but also prevents dangerous products from entering the country. The government spent three years developing it.