Prices, exports, consumption on the rise

Prices, exports, consumption on the rise 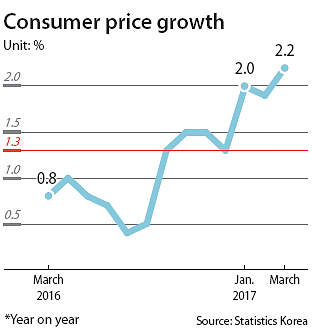 Some economic indicators are showing signs of health, but analysts don’t know if the good news will last long.

Inflation, which can be a sign of economic strength, has been picking up this year. The rate rose 2 percent year on year in January and 1.9 percent in February.

Consumer prices tend to increase when demand for products and services rise, a sign of economic strength.

Consumer prices for agricultural produce, livestock and fishery products rose by the most at 5.8 percent when compared to the previous year.

“Prices of agricultural produce rose mainly due to the base effect from last year when they dropped 2.1 percent,” said Lee Joo-hyun, a director at the Ministry of Strategy and Finance. “The government will continue to monitor the market to stabilize consumer prices of such products.”

Prices of tangerines jumped 106.2 percent year on year and those of fresh eggs rose 43.1 percent.

The cost of jeonse, or lump-sum deposit rent contracts, was up 3 percent compared to the previous year.

There are other signs of economic recovery.

The Ministry of Trade, Industry and Energy announced Saturday that exports in March rose 13.7 percent year on year to $48.9 billion. Korea’s exports rose for the fifth consecutive month starting from November after falling for two consecutive years. Exports reached their highest level in two years and three months.

Domestic consumption rose 3.2 percent in February after falling from November 2016 through this January. The composite consumer sentiment index hit 96.7 in March, the highest level since October.

However, analysts had mixed readings on the good economic indicators.

“It is true that the economy has improved recently but the problem is how long we can keep it this way,” said Kim Young-ick, an economics professor at Sogang University. “Exports to China might decrease from now on and the problem we face is the domestic economy. Household incomes are going down, while household debt is rising, which is making fewer people financially stable enough to consume more.”

A researcher from the Hyundai Research Institute said that the country’s exports are expected to grow further but that fundamental problems need to be solved to expect the economy to continue to improve.

“Exports will improve further from now on and I don’t think emerging countries will be hit negatively by interest rate hikes in the United States,” said Hong Joon-pyo, a researcher at the Hyundai Research Institute. “Domestic consumption has improved mainly due to the base effect from the fall in the past few months. It is hard to discuss whether the economy is finally recovering or not at this moment unless fundamental problems are addressed, such as uncertainties in the housing and labor markets.”